US Man Knocked Unconscious After Getting Struck by Lightning 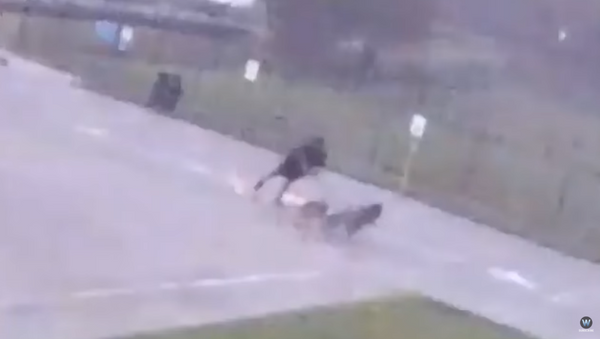 © Screenshot/Life With Weather
Subscribe
Newly released surveillance footage shows the moment that Texas man Alex Coreas came close to death last week after he was suddenly struck by lightning while out walking his three dogs near the Stuebner Airline Veterinary Hospital.

Roughly 10 seconds after Coreas exits the dog park, he lands facedown on the concrete after being hit by lightning. The Texan’s three dogs are subsequently seen running away from the scene; however, they were later reunited with their owner.

Christy Mittler, a worker at the veterinary clinic, told local station KTRK that when she and other good Samaritans approached Coreas, he wasn’t breathing or moving, and his clothes were severely burned. “His shoes and his socks got blown off his feet,” she recalled. Mittler and two others administered CPR to Coreas until they felt his pulse return.

Coreas suffered burns and lost some hearing in his left ear. His fall also left him with a swollen left eye that has remained shut since the incident occurred. He told KTRK that he has “no memory of being hit.”

A hole in the concrete was reportedly left in the spot where Coreas was hit. A GoFundMe page has since been launched by Coreas’ family in an effort to collect enough money to cover his medical expenses.