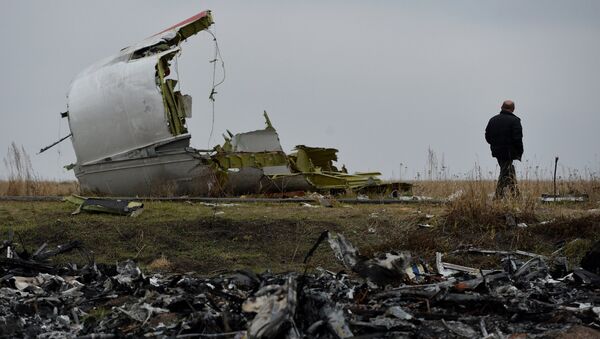 BERLIN (Sputnik) - Joseph Resch, a German detective, who carried out his own investigation into the 2014 Malaysian Airlines MH17 crash over east Ukraine, ordered by a private client, said that he was ready to discuss sharing his findings on the causes of the tragedy with the Malaysian authorities.

"We believe that the Malaysian authorities should contact us via the embassy or a lawyer, so that they could inform the Malaysian government about the ways this could be organised, if the conditions are satisfied," Resch said.

On Thursday, Malaysian Prime Minister Mahathir Mohamad said in an interview that Malaysia was ready to study the evidence collected by Resch.

In July, Resch, who has been independently investigating the MH17 disaster since 2014 at the behest of an unnamed client, attempted to submit potentially groundbreaking new material on the case to the Dutch-led Joint Investigative Team (JIT), but was rejected after he asked to make the information public.

Malaysia Airlines Flight MH17, was shot down on 17 July 2014 as it was flying over eastern Ukraine, where a military conflict between the Ukrainian Army and the Donetsk People's Republic (DPR) was taking place at the time. Kiev delegated the investigation into the incident to the Netherlands, but before the probe even started, Western governments accused Russia of supplying the DPR with the weaponry that had allegedly had downed the plane. Moscow denied being involved in the conflict in general, let alone supplying the DPR with arms.