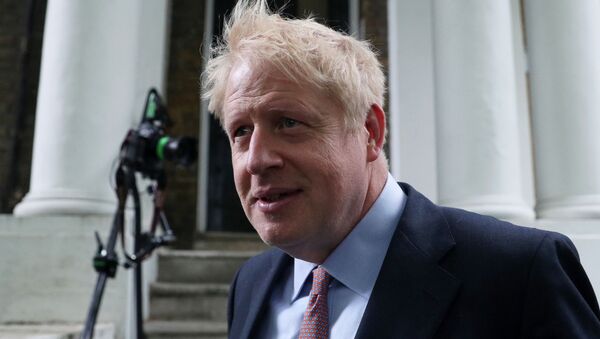 Labour Party leader Jeremy Corbyn is meeting other opposition politicians in an effort to avert a no-deal Brexit. It comes as the British government seeks to renegotiate Theresa May’s Brexit deal with the EU.

The Prime Minister's spokeswoman said Tuesday he has set out a “range of options” as an alternative to the Irish backstop.

Asked by journalists about reports the prime minister was happy to accept the rest of Mrs May’s Brexit withdrawal deal if the backstop was removed, she said he had been clear the changes he was seeking were to the backstop only.

But Brexit Party leader Nigel Farage said the withdrawal agreement was the “worst deal in history” even if the backstop was removed.

​The prime minister's spokeswoman said last week's discussions with Angela Merkel and Emmanuel Macron had gone well and she added: "What is clear is if there is goodwill on both sides and a determination to get things done, solutions to the backstop exist and the prime minister thinks these should be discussed without delay."

A spokeswoman for European Commission President Jean-Claude Juncker said the EU would engage constructively with the UK government about any concrete proposals.

Mr Johnson, speaking at the end of the G7 summit in France, said: "It's the job of everybody in Parliament to get this thing done. I think it's what the people want, I also think, by the way, it's what our friends and partners on the other side of the Channel want - they want it over."

​The Labour leader, Jeremy Corbyn, is planning to defeat the government in a no-confidence vote and then become caretaker prime minister.

Mr Corbyn met with the leaders of the SNP, Liberal Democrats, Change UK, Plaid Cymru and Green Party on Tuesday and said he was willing to consider "all tactics available" to stop the UK leaving the EU on 31 October without a deal.

After the meeting the opposition parties put out a joint statement in which they said: "The attendees agreed on the urgency to act together to find practical ways to prevent No Deal, including the possibility of passing legislation and a vote of no-confidence."

Green MP Caroline Lucas said the opposition parties would try to pass a law to force the Prime Minister to seek a delay to the 31 October exit date.

She said "the legislative way forward is the most secure way to try to extend Article 50, to get rid of that 31 October deadline towards which the prime minister is careering with ever greater recklessness."

The prime minister’s spokeswoman also said Mr Johnson understood the concerns of people in the UK on fracking and said shale gas developments must be “safe and environmentally sound”.

She said the government’s view was that shale gas had the potential to deliver job and improve Britain’s energy security situation.