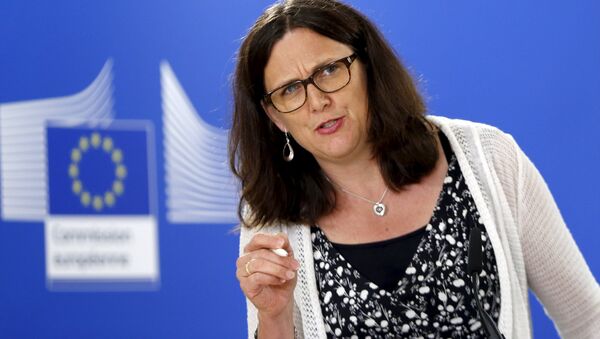 Since the election of Donald Trump in 2016, the US government has followed a policy of attempting to reverse the alleged disproportionate levels of trade towards partners such as China, Japan, and the European Union.

The European Union has revealed its counter-plan to potential tariffs on EU cars put up by the United States; an imposition of extra duties of up to 35 billion euros ($39.1 billion) worth of US goods.

European Trade Commissioner Cecilia Malmstrom told a committee of the European Parliament on Tuesday that “we will not accept any managed trade, quotas or voluntary export restraints and, if there were to be tariffs, we would have a rebalancing list.”

The EU chief indicated that the plans were already "basically prepared" for duties amounting to 35 billion euros. However, she said that she hopes they would not be necessary.

The comments follow a statement by US Donald Trump in May that Washington will put tariffs on specific imported vehicles and parts which Trump claims are a threat to "national security".

However, the plan was put on hold while trade talks with the European Union and Japan recommenced.

Malmstrom said she welcomed the delay but said that the idea that EU car imports could be considered a threat to national security was "absurd", according to Reuters.

She explained that while the ongoing talks to ease the process of showing that goods meet EU and US standards respectively, the US still demands that agricultural goods be included in the trade deal, which the EU will not accept.

It is anticipated that the World Trade Organization will make a decision in September regarding the scale of sanctions which Washington can place on European subsidies for Airbus, a European plane maker, regarding tax breaks to its US rival Boeing.

The tariffs come as part of the Trump Administration's tendency to adopt protectionist measures in response to what he considers unfair trade imbalances.

The US government has also specifically directed its economic warfare towards China, which it claims is using its technology industry, specifically firms such as the telecoms giant Huawei, of spying on behalf of the ruling Chinese Communist Party.