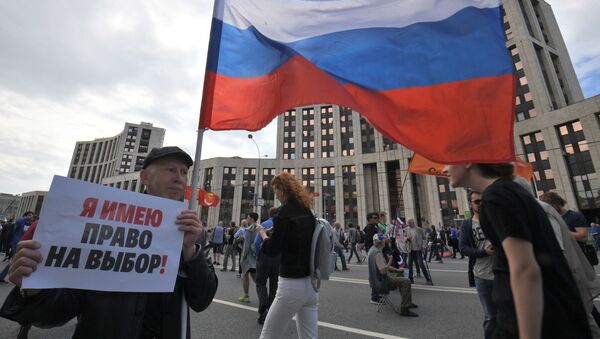 MOSCOW (Sputnik) - About 12,000 people took part in a coordinated opposition rally on Academician Sakharov Avenue in Moscow, the organisers of which demand that the nominees for elections to the Moscow city parliament be registered as candidates, according to the city police.

"About 12,000 people take part in the event. Police and Russian National Guard officers ensure protection of public order and security", the police said.

The rally ended without any major incidents. One man was reportedly detained at the rally for launching a drone.

The nomination of candidates was completed on July 5. In the first stage of the election campaign, a total of 233 candidates were registered after the city election commission had checked signatures collected by them. It registered 171 party-nominated and 62 self-nominated candidates, another 57 nominees were denied registration, including nominee from the Yabloko party Sergey Mitrokhin, opposition figures Dmitry Gudkov and Lyubov Sobol, rock musician Sergey "the Spider" Troitsky, former footballer Dmitry Bulykin and actor Andrey Sokolov.

The city election commission cited a large proportion of "bad" signatures as the reason for denials. Some of those denied registration protested the decision, accusing the commission's signatures checkers of gross violations.

Some nominees appealed the decision in the Russian Central Election Commission (CEC) with a demand to intervene in the process and meet with them. Later, CEC Deputy Chairperson Nikolay Bulaev pointed out that the commission had no authority to correct violations in regard to the signature lists of candidates for the Moscow City Duma, noting that they may be challenged in court.

Elections to the Moscow City Duma of the seventh convocation will be held on a single voting day on September 8.