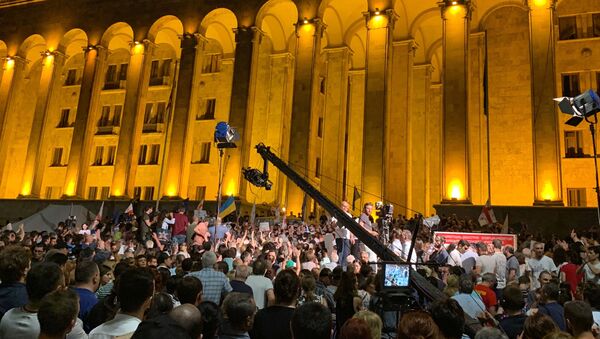 Subscribe
Earlier in the day, Georgia's Channel 1 reported that demonstrators and opposition representatives, attempted to storm the parliament building in Tbilisi, demanding the ousting of Chairperson of the Parliament Irakli Kobakhidze and Minister of Internal Affairs of Georgia Giorgi Gakharia.

On Thursday, Georgian opposition lawmakers left the session of the General Assembly of the Interparliamentary Assembly on Orthodoxy as the president of the assembly, Sergey Gavrilov, a member of the Russian delegation, opened the session in the seat of the head of the Georgian parliament. The session was interrupted, and the building was mobbed by radicals.

According to the Rustavi 2 report, sporadic clashes between police and protesters are underway.

The European Union is calling on Georgian sides to exercise restraint and act in line with the constitution, Carl Hartzell, the EU ambassador to Georgia, said on Friday in the wake of violent protests in Tbilisi.

"We are following very closely events in @Geoparliament in Tbilisi this evening. We recognise the hurt that many people feel today. We urge all sides to remain calm, show restraint and act within the framework of the Constitution at all times," Hartzell wrote on Twitter.

The embassies of Germany and the United Kingdom in Georgia have also called on the protesters to remain calm.

"Thirty activists and 38 law enforcement officers have requested medical assistance. They are not in a serious condition," Sergeenko, who visited hospitals where those injured were brought, told reporters.

The Georgian special operations forces dispersed participants of the rally outside the parliament building in Tbilisi, while the patrol police began detaining demonstrators, live broadcasts by local TV channels showed in the early hours of Friday.

The Georgian 1TV broadcaster reported that the law enforcement units forced the protesters from the territory adjacent to the parliament building. However, there are still some demonstrators remaining in the nearby areas.

The police began detaining the remaining rally participants on the streets in the vicinity of the parliament.

The Rustavi 2 broadcaster reported that members of the special operations forces were pursuing the activists in the nearby areas.

Moreover, there are still water cannons parked outside the parliament building, while the special operations forces keep firing rubber bullets on the protesters.

Ambulance workers are providing aid to those injured on site.

The Georgian special operations forces have again started using tear gas against remaining protesters rallying outside the parliament building in central Tbilisi, according to one of the demonstrators.

"They are again using gas and firing rubber bullets. The situation is beyond control," Georgy Chikhvadze said.

The Georgian special operations forces are using rubber bullets, tear gas and water cannons to disperse protesters rallying at the Shota Rustaveli Avenue in Tbilisi, where the Georgian parliament is located, in the early hours of Friday, according to live broadcasts by local TV channels.

The broadcasts showed that the protesters had been forced to move to nearby streets, while only journalists remained near the parliament building.

The Georgian Interior Ministry called actions of protesters outside the parliament building in Tbilisi a government overthrow attempt, saying its personnel had used tear gas against the protesters after the demonstrators continued storming the building despite the law enforcement’s calls not to do this.

The ministry added that it used "special capabilities outlined by the law" to ensure the safety of the police and to counter the protesters.

Thirty-eight law enforcement officers and 14 protesters have been injured during a rally outside the Georgian parliament building in Tbilisi, where the police used rubber bullets and tear gas to suppress opposition demonstrators, the Georgian Ministry of Labour, Health and Social Affairs said on Friday.

The ministry said late on Thursday that 16 people had been injured.

"Thirty-eight law enforcement officers and 14 activists have been wounded," the ministry said.

Sixteen people have been injured during an opposition rally outside the Georgian parliament building in central Tbilisi, at which the police used tear gas and rubber bullets against protesters, the Georgian Ministry of Labour, Health and Social Affairs said on Thursday.

"Sixteen people have been wounded. Twelve of them sustained minor wounds while four [people sustained] moderate [injuries]," the ministry said, as quoted by the local 1TV broadcaster.

Georgian Prime Minister Mamuka Bakhtadze welcomed on Thursday the "justified public protest" over the incident in the parliament building involving the Russian delegation, but stressed that the opposition was trying to politicize the protests and destabilize the situation.

According to the Rustavi 2 broadcaster, a reporter from Georgia's 1TV was hit by a rubber bullet amid ongoing clashes with local police.

"A journalist from Georgia's state-run broadcaster was injured. There are many people were injured. Clashes [are] ongoing", Rustavi 2 reported.

Police in Tbilisi on Thursday used tear gas and rubber bullets to disperse a protest rally near the parliament building following the incident involving involving members of the Russian delegation at a session of the General Assembly of the Interparliamentary Assembly on Orthodoxy, the Rustavi 2 television reported.

"More and more citizens are requiring medical assistance as it was pepper gas. Despite the actions of the special police forces, some of the protesters are still standing outside the parliament building," the reports said.

According to the report, sporadic clashes between police and protesters are underway.

Police Use Tear Gas, Rubber Bullets Against Tbilisi Protesters - Reports (PHOTOS, VIDEO)
000000
Popular comments
"Opposition Protest" ? That is not a protest! but a color undemocratic takeover.