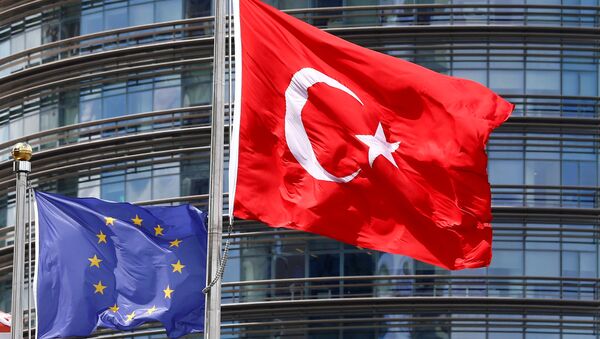 MOSCOW (Sputnik) - The Istanbul mayoral election, set to be re-run after the opposition party won in March vote, may become a turning point for EU-Turkish relations and Turkey's — recently stalled — integration in the bloc, according to experts.

The Turkish main opposition Republican People’s Party (CHP) gained more votes than the Justice and Development Party of Turkish President Recep Tayyip Erdogan during the election in Istanbul in March. CHP mayor candidate Ekrem Imamoglu assumed his post at the helm of the city on 17 April but his mayoral certificate was canceled on 6 May when the Supreme Electoral Council voted to annul the results of the elections.

World
Erdogan: EU 'Doomed to Failure' Without Turkey's Full-Fledged Membership in Bloc
The re-run will take place on 23 June.

The annulment of the results of the vote won by the opposition party was not welcomed by the European Union. EU foreign policy chief Federica Mogherini suggested that the Turkish election watchdog should provide a public explanation for its decision to re-run the vote.

The mayoral vote debacle occurred just when the EU-Turkish talks on EU membership had "effectively come to a standstill," according to the European Commission. In last week's progress review on Turkey, the commission said that the country had been backsliding in the area of public service, judicial system and anti-corruption fight.

"Whether or not the European Union will eventually find the courage to stand up for the values it claims to uphold is difficult to say. But it may be that the rerun of the mayor election in Istanbul on 23 June will leave it with no choice," Gareth Jenkins, a non-resident senior research fellow with the Joint Center Silk Road Studies Program and Turkey Center at the Institute for Security & Development Policy in Stockholm said.

The next day after the damning report Erdogan unveiled a new judicial reform package. According to the Turkish president, the new reforms demonstrated Turkey's commitment to the EU accession, although he stressed that Turkey was implementing reforms not because the European Union wanted it to but because Turkey needed them.

Seda Demiralp, an associate professor of political science at the Isik University in Istanbul, believes that the announcement could be "a strategy to consolidate the [ruling Justice and Development Party] AKP's votes before the 23 June repeat elections." At the same time, the Isik University professor believes that the 23 June election will be "critical" in terms of Ankara's relations with the West.

"If the opposition candidate wins again and the ruling party accepts the results, this will most certainly be a turning point towards re-democratization. Such a development would also positively impact Turkey's relations with the West, including the European Union and North America," Demiralp said.

Half of Danes Against Further EU Expansion, Say It's 'Gone to Far' - Survey
Erdogan remarked in early May that Turkey would continue its efforts to join the bloc. The Turkish president added, however, that the European Union needed Turkey more than Turkey needed the bloc.

The commission did say in its report, issued several weeks after Erdogan's speech, that Turkey remained a key partner for the bloc. According to Brussels, the two will continue dialogue on economy, energy, migration, trade and support of refugees. The latter has been one of the major areas of cooperation for Ankara and Brussels. The two struck an agreement in 2016 to stem the flow of refugees into the bloc, which would in exchange disburse several billion euros for the refugee facility in Turkey.

However, 2016 was also marked by a coup attempt in Turkey. A state of emergency was introduced and thousands of people were arrested in the aftermath of the attempt. The European Union voiced concerns over the methods employed by Ankara.

The accession negotiations have been ongoing since 2005, although Turkey filed an application to become an official member of the European Community as far back as in 1987.