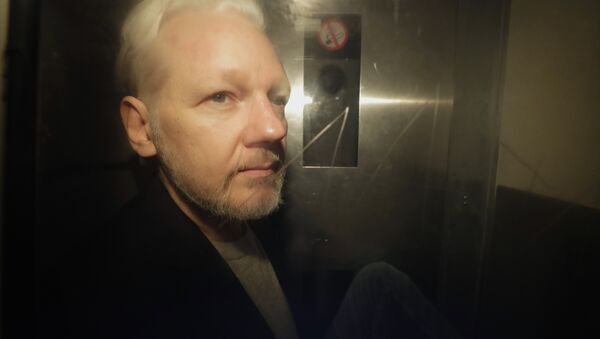 © AP Photo / Matt Dunham
Subscribe
International
India
Africa
With jailed WikiLeaks founder Julian Assange in a prison hospital, a timely report by the United Nations blasted his treatment for the last seven years, calling it “psychological torture.” Between the report and the Espionage Act charges brought against him by the US, one expert predicted a turning of public opinion in Assange’s favor.

"Mr. Assange showed all symptoms typical for prolonged exposure to psychological torture, including extreme stress, chronic anxiety and intense psychological trauma," Nils Melzer, UN Special Rapporteur on Torture and Other Cruel, Inhuman or Degrading Treatment or Punishment, wrote in a Friday report. "The evidence is overwhelming and clear. Mr Assange has been deliberately exposed, for a period of several years, to progressively severe forms of cruel, inhuman or degrading treatment or punishment, the cumulative effect of which can only be described as psychological torture."

Between June 2012 and April 2019, Assange was holed up in the Ecuadorian Embassy in London, which offered him sanctuary from what he believed would ultimately amount to charges by the US for his role in facilitating dozens of leaks of classified documents via WikiLeaks. When the Ecuadorian government canceled his asylum status last month, British police arrested him and sent him to jail for 50 days for having skipped bail back in 2012.

Following his arrest, US federal prosecutors unsealed an indictment, soon superseded by a much more powerful one, that brought 18 charges against Assange, including allegations that he violated the 1917 Espionage Act. Assange, 47, now faces 175 years in prison.

Joe Lauria, the editor-in-chief of Consortium News, told Radio Sputnik's Loud and Clear Friday that along with the Espionage Act charges, the UN report was "turning public opinion even further in Assange's direction and making an extradition to the US, I think, more difficult."

​Lauria told hosts Brian Becker and John Kiriakou that Melzer was approached by Assange's lawyers "as early as December of last year," while Assange was still in the Ecuadorian Embassy, but Melzer declined to visit him at that time. "Apparently he believed a lot of what the media was saying about Assange."

"But then he finally agreed, and he went there on May 8 with two doctors and they examined him for signs of torture and we waited until now to get this report, which was apparently given to Britain, and Ecuador, and Sweden, and the US on Monday," Lauria said, noting the statement only appeared on the UN website on Friday.

It's "just extraordinary in its directness and its power," Lauria said. "He names those four governments. He says, ‘In 20 years of work with victims of violence and political persecution, I have never seen a group of democratic states ganging up to deliberately isolate, demonize and abuse a single individual for such a long time and with so little regard for human dignity and the rule of law.'"

"He calls for the collective persecution of Julian Assange to end now, here and now. He says, ‘The evidence is overwhelming': he has ‘been deliberately exposed, for a period of several years, to progressively severe forms of cruel, inhuman or degrading treatment or punishment, the cumulative effects of which can only be described as psychological torture,'" Lauria said.

"You can't get any blunter than that."

Melzer retorted that the WikiLeaks founder was "about as ‘free to leave' as a someone sitting on a rubberboat in a sharkpool."

With all due respect, Sir: Mr Assange was about as „free to leave“ as a someone sitting on a rubberboat in a sharkpool. As detailed in my formal letter to you, so far, UK courts have not shown the impartiality and objectivity required by the rule of law.

​Lauria predicted the report would further complicate Assange's extradition to the US.

Kiriakou said he spoke with Assange's father, Richard, earlier on Friday to assess how "real" the hospital visit was, and the elder Assange assured him it was indeed serious.

Julian sent Kiriakou a letter, which he received on Saturday. "He addressed his health, in this letter, and said that his health was suffering greatly. He has not been exposed to direct sunlight in more than six-and-a-half years, if you can imagine such a thing. He has a severe, a dangerous vitamin D deficiency; his legs are beginning to bow from a lack of vitamin D and vitamin C."

Kiriakou, who served 30 months in a federal prison for his role in exposing US torture practices, noted from his own prison experience that "they don't put you in the prison hospital unless you are seriously sick" because prison staff are on guard for "malingerers," or people who are using it as an excuse to escape their normal routine. Plus, prison hospitals are "dumping grounds for doctors who just couldn't cut it anywhere else," he said.

Lauria recalled that staff at the Ecuadorian Embassy had pressured Assange for years to seek medical attention for a persistent cough, but he was barred from exiting by the threat of arrest if he did.

"The problem begins with the extradition," Lauria said. "I think this report from the rapporteur, his health situation, and the Espionage Act [charges], criminalizing journalism, has turned public opinion in his favor and made a mess out of this for both the British and American governments, I think. Do they want to be sending a sick man to a country that's going to put him on trial for basically practicing investigative journalism? I think it's going to be really hard to do that."

"My fear is that they've had him now for 30 days before he became so sick. I don't think they're going to sit around, the American and British authorities — who are so incensed about what this man had done and revealing some of the crimes and corruption, of course, that WikiLeaks has revealed. They weren't going to wait around until he gets convicted and then thrown in jail and then try to interrogate him… They had him for a month and… you really can't imagine they didn't interrogate him to try and get what they can out of him right now, and they have not taken care of him."