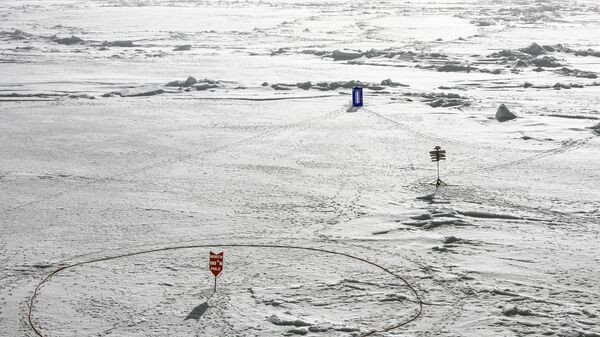 Earlier this year, scientists were forced to update the geographic coordinates of the magnetic North Pole a year ahead of schedule after discovering that it was moving from the Canadian Arctic toward Russian Siberia at an accelerated pace.

Canada would suffer a 'psychic blow' if it were to lose control over the magnetic, geographical and geomagnetic north poles, Royal Canadian Geographical Society CEO John G. Geiger has warned.

"We must do everything in our power to ensure that the geomagnetic North Pole remains Canadian," the top geographer stressed, speaking to Maclean's Magazine about the recent update to the World Magnetic Model.

"Perhaps we should be planting our flag on it this summer," he added, possibly alluding to Russia's 2007 move to plant a metre-high titanium Russian flag on the sea floor at the geographic North Pole, which Russian scientists said is directly connected to its continental shelf.

Geiger warned that Russia was prone to "chest-thumping" over symbolic geographic prizes, and would likely do the same when the magnetic north pole finally makes it to Siberia. "Nothing is forever in the world of magnetism," he lamented.

Ultimately, Phil Livermore, director of the Institute of Geophysics and Tectonics at the University of Leeds in the UK, urged Canadians not to worry, saying that while the magnetic North Pole may move to Siberia eventually, the eternal tug-of-war between two powerful magnetic patches underneath Canada and Russia will one day see the magnetic north pole coming back to Canada.

Maclean's jouornalist Alanna Mitchell, meanwhile, took consolation in the fact that while Siberia can boast to be the 'Pole of Cold' (i.e. the coldest place in the northern hemisphere) today, global warming in the Arctic makes it uncertain "how long it can wear that crown."

The US National Oceanic and Atmospheric Administration and the British Geological Survey updated the location of the magnetic North Pole in February, calculating that the pole is leaving the Canadian Arctic and moving toward Siberia at a rate of over 55 km per year, up from just 15 km per year in the year 2000.