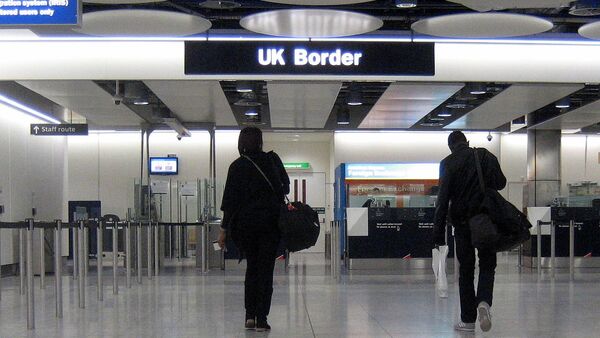 CC BY 2.0 / dannyman / The UK Border at Heathrow Airport
Subscribe

The National Audit Office has warned that six out of eight IT systems running UK borders under a no-deal Brexit could not be ready by 29 March.

Sputnik has discussed the issue with Robin Tilbrook, the chairperson of the English Democrats.

Sputnik: With only 29 days to ‘B-Day’, how is such lack of preparedness possible?

Robin Tilbrook: The British government has got the most awful record of dealing with anything to do with IT: any IT contracts seem to go wrong, they take far longer than they're supposed to take to deliver, and they also cost much more than it was originally bargained for.

Brexit Mess: UK PM Had Habit of Kicking Tough Decisions Into Long Grass - Journo
Sputnik: What could have led to such lack of preparation?

Robin Tilbrook: Any sensible negotiator would be looking at trying to make arrangements whereby they organised themselves to go for a no-deal option; but we just don't have a governmental system in this country which is focused on actually delivering what it's supposed to be delivering.

It talks the talk about what it's going to do, but when it actually comes to it, it really isn't focused on delivering it.

Organisation requires the political will or the decisiveness at the top to order things to be done, so that they are then done. What's happened with Theresa May is that she's not prepared to give those orders. So there hasn't been that political will at the top to insist on preparation being done properly.

British MPs Vote on Brexit Amendments as Article 50 Deadline Approaches (VIDEO)
If there was now that political will to do it, I suspect this probably could be done, because she did have IT technicians working around the clock, being paid overtime in order to get it sorted out.

But the government is just sort of drifting on, without actually delivering on the type of things that you expect the government to do. So there's a carrying on at a level of incompetence which is going to lead to trouble.

Views and opinions expressed in this article are those of Robin Tilbrook and do not necessarily reflect those of Sputnik.