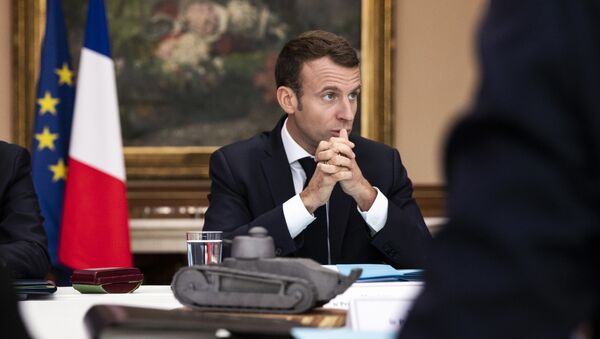 Radio Sputnik has discussed the new Franco-German agreement signed 56 years after the original Elysée accord with Gino Raymond, Professor of Modern French Studies, University of Bristol.

Sputnik: What are your thoughts on this new treaty? Does it open a new chapter in German-French relations?

Gino Raymond: There is a very powerful symbolic element to it, of course. It's taking place in what in German is called Aachen and in French is called Aix-la-Chapelle and is taking place in what was the site of the palace of Charlemagne. As you know Charlemagne's empire covered most of what is now modern Germany and modern France. Both Emmanuel Macron and Angela Merkel have received the Prix Charlemagne, which is a prize bestowed on a European statesperson who has advanced the cause of European cooperation. So there is a very powerful symbolic element to this.

Italy's Deputy PM Hopes French Voters Won't Choose Macron's Party in EU Election
What it does do, I'm not sure about a new chapter, but it certainly does build on existing relationships. It's building on what's already there, it's deepening a pre-existing relationship because many of these things aren't quiet headline-grabbing but, for example, when it comes to issues like consolidating defence technologies France and Germany are already very closely intertwined in Airbus; and when you think, for example, on proposals for joint media platforms, France and Germany had already created ARTE as a joint media outlet. So it's building on what's already there.

Sputnik: The goal of the new treaty is to deeper converge the two nations economies, is this an attempt to show example to other European Union nations?

'Days of European Unification Over': Prof. on Merkel-Macron Cooperation Treaty
Gino Raymond: I think clearly there are various indicators suggesting that the EU, as well as other economies across the world, is facing troubled times. Growth is slowing France, you could even argue that German is already in recession, and Macron came into power with the promise to pull Europe more closely together, especially those nations in the eurozone, in order to avoid difficulties there have been in the past. So yes, there is an attempt here to provide an example, an attempt to encourage the kind of conversion that has been lacking and that was largely responsible for the difficulties faced in the eurozone especially after the difficulties, the credit problems created in 2008.

READ MORE: Scholar: Macron Has to 'Pull the Rabbit From the Hat' This Time

But there are, nonetheless, significant fault lines. It is difficult to see how, for example, a country like Italy will be inspired by this move because from an Italian point of view they can see, for example, that France in the coming year will not be able to stick within the 3% ceiling with regard to its overshoot in terms of its indebtedness with regard to its budget. So while the French may be able to do that and not receive too much criticism, the Italians feel very unhappy at the fact that they always seem to be picked on with regard to a lack of fiscal discipline.

Sputnik: The development comes as both Ms Merkel and Mr Macron are weakened domestically, what correlation does it have to the timing of the treaty's signature?

Gino Raymond: It's very clear, I think, that Angela Merkel is thinking of her legacy. She has dominated the European political scene for the best part of two decades. Now she's an outgoing chancellor and she's thinking of how will Europe and how will history judge her legacy.

'Act Together': Macron, Merkel to Sign New Treaty on Bilateral Cooperation
Macron is in a different situation. He came into power with the idea of promoting Europe and being the leader who will take the European cause onwards. Both of them have faced political difficulties. Macron, especially with the Gilets Jaunes movement, the Yellow Vests movement and the way this has destabilised many of his plans for bringing about especially economic reform in France. And of course Macron, in particular, is very concerned about the European elections that are going to happen in May.

The polls suggest that his movement the LaREM — La République En Marche! — might poll around presently according to the polls it might get around 23% of the popular vote. That will only put it 2% ahead of Marine Le Pen's Rassemblement National — the National Rally. So that would not look good, and he's very concerned to polish up his credentials as the leader of the European project, and hopefully avert what could be an embarrassing result in the European elections in May.

Sputnik: Professor, speaking of Ms Merkel, she has been called a de facto leader of the European Union, now that we know that Ms Merkel will finish her political career in 2021 can we say that Mr Macron wants to step into her shoes?

They think, intellectually, that the European project is very much their project, and I think Macron would very much like to see himself as the great European leader. Whether he succeeds in doing that is another matter. Because I've already mentioned the tension within the European Union. The bottom line is that France economically is still very much in a fragile state and it's going into a period of low or no growth. So whether he can actually step into the shoes of Merkel as the European leader is debatable.

Sputnik: Returning to this bilateral treaty professor, among other things the document outlines the negotiations on the reform of the United Nations Security Council and French support for the German candidacy for permanent membership in the body. Do you think it will be approved and how will the United Nations respond to this proposal?

'No Connection' Between Trips Abroad and Elysee Role – Macron's Ex Security Aide
Gino Raymond: There are complications here. I think France, in spite of its purported ambitions to push the European project forward, France still has very much the ambition to remain a great player on the stage as a sovereign national state. So there are warm words, of course, with regard to Germany and they are warm words with regard to this ambition of a seat as permanent member of the Security Council; but I think at this stage there are no indications that this will be anything more than warm words.

Sputnik: Mr Macron has long voiced his wish for a true European army, which Ms Merkel supported. With this new treaty signed what are the chances that this idea will gain some traction?

Gino Raymond: It is interesting that in contrast to France, of course, as you know France left NATO over half a century ago, Germany is still wedded to the Atlantic alliance. Germany is still wedded to the idea of the United States playing a crucial role in Europe's defence architecture. There are grave doubts as to whether Germany can actually disinvest in NATO and invest in a European army or a European counterpart. That's one issue.

No End in Sight? 'Yellow Vests Soldier On Amid Macron’s Peacemaking Attempts
The second issue, of course, is the money. Germany, of course, is famously reluctant to increase its military budget, will it contribute to NATO as well as increasing its financial expenditure to create a European army?

And there's a third consideration. Would other members of the European Union like Hungary, like Poland, like the Czech Republic, for historical and cultural reasons, would they be happy to see a powerful German contribution to European army, given the fact that Germany would financially and materially be the dominant partner? Will they be willing to accept that? Especially, as with the possible departure of Britain from the European Union, there would be an imbalance in that particular military infrastructure.

Sputnik: Professor, does Europe really need its own army? It has NATO, France has its own army, quite a powerful one, last time I checked it was in the top five most powerful armies.

So the issue here is about France and Europe being able to emancipate themselves from the American umbrella. So there are very powerful political considerations behind this; especially as given the deteriorating relationship between the EU and the United States under Donald Trump. It may change after Donald Trump leaves office, but at the moment there seems to be almost profound shift in American attitudes to Europe and the European Union, particularly France, is conscious of that.