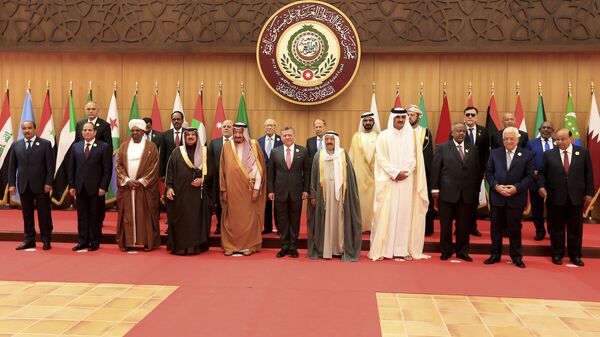 MOSCOW (Sputnik) - Arab League’s Assistant Secretary-General Hossam Zaki told Sputnik on Saturday that Syria's invitation to the organization’s summit in Tunisia in March would not be discussed during the Arab Economic and Social Development Summit that will take place in Beirut later this month.

"The League has no plans to discuss invitation to the body’s summit in Tunisia during the upcoming meeting in Lebanon to which Damascus is not invited either," Zaki said.

The deputy chief also confirmed that the Beirut summit will take place in January as planned despite the Lebanese parliament speaker's call to postpone it.

US Starts Withdrawal of Military Hardware From Syria 'for Security Reasons'
The League suspended Syria’s membership in 2011 after the war broke out. Member states then pulled their ambassadors from the country. But recently they have been making steps to re-establish diplomatic ties with the government in Damascus.

Lebanon, which will host the League’s economic summit on January 19-20, reportedly sought last year to convince other member states to invite Syria to Beirut but the discussion was postponed until the following summit in Tunisia in March.

A diplomatic source from an Arab League state told Sputnik in January that the organization was working on a resolution to readmit Syria. The move, he said, could be discussed as soon as this month. More recently, Lebanese Parliament Speaker Nabih Berri said the Beirut summit should not be held without Syria.