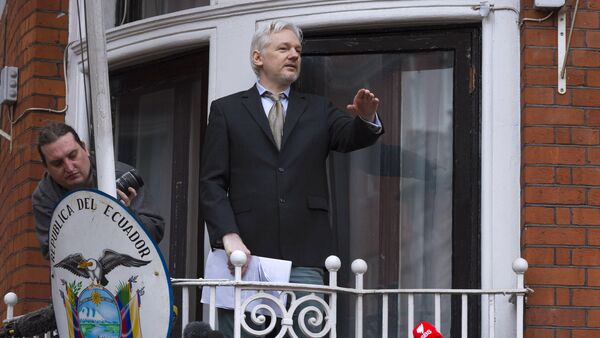 Two German MPs have visited Wikileaks founder Julian Assange in the Ecuadorian embassy in London, on Thursday. Speculation is growing that the move could be part of a fresh effort to end Assange’s self-imposed exile.

Sputnik: It is reported that the two politicians met with Assange to pass on their "greetings of solidarity from the Left party and his many supporters from Germany," what do you think of this visit?

World
US Embassy Purchase Orders Give Hints of American Spying Plans - WikiLeaks
Peter Tatchell: He has been very isolated in the embassy, there have been serious restrictions on the visitors he can have, and I think that indicates that there are people in other European countries who feel very strongly that Julian Assange’s draconian conditions in the embassy are unacceptable, they are a violation of human rights, and that some solution needs to be found to get him out of the embassy, and to get him to Ecuador – where he has been granted political asylum.

What the German Members of the Parliament could do is open the question, but they are opposition MPs, of a fairly small, minor party in the German Parliament – it’s good that they are concerned about Julian’s fate, but I am not too sure they will have any power or any capacity to substantially change his position.

Ecuador Can't Guarantee UK Won't Extradite Assange, Prosecutor General Says
Sputnik: The MPs discussed the possibility of finding a "humanitarian solution" to Assange's legal situation, what could this be?

Peter Tatchell: Julian Assange is a citizen of Ecuador. He was granted a citizenship in December 2017, he has been granted political asylum in Ecuador as well.

And therefore, under the international refugee rules, which Britain has signed up to, the UK government is obliged to recognise his political asylum and to facilitate his passage to Ecuador.

The only complicating fact is that he skipped bail when he went into the Ecuadorian embassy, and that is an offence under British law.

So I would suggest that the British government could negotiate with Julian Assange and his lawyers to agree that he will pay some kind of penalty for skipping bail, maybe a fine, perhaps even a short prison sentence in a British jail, and then he will be given a safe passage to go to Ecuador.

We need the British government to acknowledge that Julian Assange is an Ecuadorian citizen, he’s got political asylum in Ecuador, and that they should facilitate it.

Science & Tech
WikiLeaks Publishes Alleged Secret Files on Amazon's Data Centers
Sputnik: What impact might a German negotiated deal have on relations between Berlin and Washington, especially given that the US are desperate to see Assange face their courts?

Peter Tatchell: Any negotiated deal by German MPs or the German government or indeed a negotiation with the British government agreeing to allow him to take passage to Ecuador – that is obviously going to create frictions with the US administration and Washington.

They are determined to get Julian Assange: we know that a secret grand jury was convened about six years ago, and it is proposing very, very serious charges which are likely to result in Assange being sentenced for somewhere between 30 to 50 years in prison.

The assurance is that he will not face the death penalty, but there are people in the US Congress who have demanded that he be put to death.

Sputnik: Does Julian Assange really deserve to pay for such grave charges?

Peter Tatchell: What Julian Assange did was shine a light on war crimes and human right abuses by the US military in Afghanistan and Iraq. That to me is not a criminal offence.

Julian Assange is a hero, not a criminal: he told the public the truth about what the United States have done in those conflict zones, which the US itself has covered up and hidden from the American people.

To me, Julian Assange should not be facing any charge at all, let alone the extraordinary draconian charges that we understand he is going to face if he’s extradited to the US.

Views and opinions expressed in this article are those of Peter Tatchell and do not necessarily reflect those of Sputnik.