Millionaire Hammond Delivers Nothing But Spin – The Rich Are Protected Again 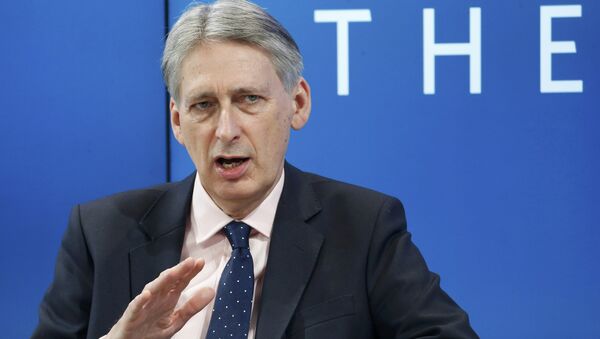 Tommy Sheridan
All materials
A multi-millionaire property tycoon charges the taxpayer for “superior” teaspoons despite being paid a salary of £141,505 a year from the public purse and receiving outrageous expenses, a huge pension, a free London flat and a grace-and-favour country mansion in Buckinghamshire announces austerity is over but continued discipline is required.

It should be the headline in today’s newspapers. It could be the basis of a sketch for a comedy sit-com but unfortunately it is no joke for millions of over-worked, understaffed and under-paid workers across the UK. It is the warped reality beamed into our homes yesterday as the Tory Chancellor, Happy Hammond, pontificated about the need for continued financial sacrifices and the benefits of prudent budgeting.

Over the last 10 years he and his cold-hearted, callous and conceited Conservative Cabinet chums have put Dick Turpin to shame for the day-light robbery they have inflicted on the majority across the UK for the benefit of the rich few. At least Turpin had the decency to wear a mask while he robbed the public. All Hammond and co wear are sneering smirks while they slash real living standards for millions but cut income taxes for millionaires like themselves. Malevolent May’s Tory Cabinet is stuffed with millionaires and the stench of privilege and their collective assault on public services, public service workers and those struggling to survive on low incomes over the last decade has been every bit as criminal as Turpin.

UK Chancellor Raises Brexit Funding to $2.5 Billion, Claims Austerity's No More
A few weeks ago May announced, to the surprise of her party, that austerity was over. Philip Hammond stood up yesterday to apparently confirm that statement but instead succeeded in exposing Prime Minister May as the liar she is. May has form when it comes to deliberately misleading the public for personal preservation from her Home Office “hostile environment” approach to airport runway positions, Brexit and now the end of austerity. In keeping with the Halloween season Hammond should have donned ‘The Joker’ outfit as his speech was riddled with unrealistic economic forecasts, spurious unemployment claims and pathetic references to improved standards of living. The most ridiculous riddle was the one about him helping not the few or the many but ‘all the people’. Aye right and those teaspoons he claimed for, along with the teapot and mugs were legitimate expenses…

Literally millions have lost their jobs in local government, retail and manufacturing o,ver the last ten years but don’t worry they have been replaced by the unregulated, zero-hour, insecure ‘gig economy’ jobs delivering fast food, driving taxis and leaving millions reliant on more than one job to try and make ends meet. Unemployment figures are artificially reduced and fail to reflect the increased poverty among working families unable to cope on inadequate wages and frozen in work benefits. The single biggest growth in poverty is among the ‘working poor’ and that is a disgrace.

If I wasn’t writing this column I wouldn’t have watched the Budget speech yesterday. I hate the sight of the pompous, pious, politicians sitting in their comfy attire yahooing like unruly school children while pontificating to the rest of us how we should live. It really is the biggest collection of benefits scroungers in Britain. Basic salaries of £74,000 per annum and access to travel, accommodation and expenses accounts that most workers could only dream of elevates them onto a different planet from that occupied by most ordinary folk.

Sure there are exceptions to the rule but the majority of elected politicians haven’t a clue what it’s like to live on low pay or survive on benefits. The last 10 years have been tough and instead of blaming the millionaires in Parliament and the Boardrooms who have caused the economic mess that led to cuts and reduced living standards many are duped into believing the narratives consciously and cynically promoted by the mainstream press.

Ask yourself how much of the £264 billion welfare bill across the UK last year was spent on unemployment benefits? The answer will surprise you given the benefit bashing practice of the nasty tabloids. Only £2 billion is the answer, a mere 1% of the annual welfare bill.

The tax dodging billionaires who own the papers and dine regularly at expensive restaurants with their puppets in parliament can’t have you pointing the finger at the real culprits causing low pay, NHS queues and housing shortages for that would draw attention to themselves. Much better to blame those who have no voice to defend themselves. Don’t blame the architects of poverty and austerity. No blame some of the victims instead. The gullible public will buy the myth.

Such deceit provokes intolerance of people who are the victims of austerity and cuts not the cause. The rich inside and outside the Parliament are the ones to blame but they own and control the mainstream media in the UK to act as a smokescreen for what is really going on. Like urinating on our shoes but insisting it is raining we are encouraged daily to blame the poor, the public service workers, the immigrants and the pensioners but never the rich and powerful.

Jeremy Corbyn is wrong not to support Scottish independence but he is right on many other things. His response to Hammond’s verbal con-trick highlighted the reality of continued austerity and the fact that teachers are on average £4,650 worse off today than 8 years ago, nurses are £4,750 worse off and firefighters, the men and women who risk their lives daily in performing their duties, are £6,700 worse off.

Austerity is Just a Fancy Name for Class War
Hammond and May are fraudsters in relation to their austerity claims. It is far from over and the Universal Credit scandal which has already increased hardship, food bank use, rent arrears, indebtedness and despair in the pilot areas will only serve to drive millions more into poverty if the switch over of the almost 4 million others is allowed to proceed. Even the cross-party Select Committee is calling for a pause in the staged migration of benefit recipients to Universal Credit such are the stories of hardship and despair they have listened to but what is required is not a pause but the cancellation of the whole wasteful exercise. Reform of the benefits system to improve uptake and ensure wider support and less complexity is welcome but Universal Credit is far from the answer.

My appeal to ordinary folk everywhere is open your eyes to reality. Don’t allow the billionaires and millionaires to fool you any longer. Wages are lower in real terms, poverty is increasing and public services are being cut to the bone to serve the rich and ruling class insatiable appetite for more and more. Stop blaming those suffering austerity and start blaming those causing austerity. Lack of money is not a problem. Society is awash with money. It is richer than any time in history. It is not the amount of wealth which is a problem it is the distribution of that wealth.

READ MORE: Our Oath Should Be to the People Not the Queen – Abolish the Monarchy

Imagine squeezing the richest 1,000 people in Britain into one room. It would be a tight squeeze but most of them deserve to be squeezed. For 10 years ago, when the economic crisis they caused with their greed began, those 1,000 richest individuals had an obscene amount of wealth between them. They were worth £256 billion at the end of 2008. Today the richest 1,000 in the UK are worth an outrageous £724 billion. Let that sink in for a moment. Only 1,000 people possess a combined wealth of £724 billion, more than 2.5 times the annual spend on welfare for millions of pensioners, children and the disabled. Only 1,000 people…

Never Cross a Picket Line – Don’t Be a Scab
So while the real wages of nurses, teachers and firefighters have been reduced by several thousands of pounds the richest 1,000 have seen their wealth increase by a staggering 183%. We are daily encouraged to believe the mainstream media narrative about shortages of cash, the ‘problem’ of an aging population putting strains on our health service and the need to freeze public sector pay and cap in-work benefits but the rich have saw their personal wealth increase by 183%… If that doesn’t make you angry then you simply aren’t paying attention. In the last year alone those 1,000 people added £66 billion to their collective incomes. No wonder the Equality Trust has been so strident in their comments:

“Our annual Wealth Tracker research in recent years reveals that a vast amount of the nation’s wealth has been captured by a tiny number of people. This is economically illiterate, socially poisonous and politically dangerous and draws a harrowing picture of UK inequality. It should be a source of national shame.

“At the same time, many will be wondering why they have not seen their wages increase over the last five years, or why despite working hard and working long hours, they are struggling to put food on the table.”

“Socially poisonous and politically dangerous” is indeed what this grotesque distribution of wealth represents. What Hammond and the Tories have done over the last 10 years has facilitated this ‘poisonous’ growth in inequality and what he said yesterday will do nothing to address it let alone reduce it. Radical wealth taxes, returning stolen assets to public ownership without compensation to the rich thieves and a legally enforceable minimum wage of at least £10 an hour are immediate first steps in the long journey towards greater economic equality and real social justice.