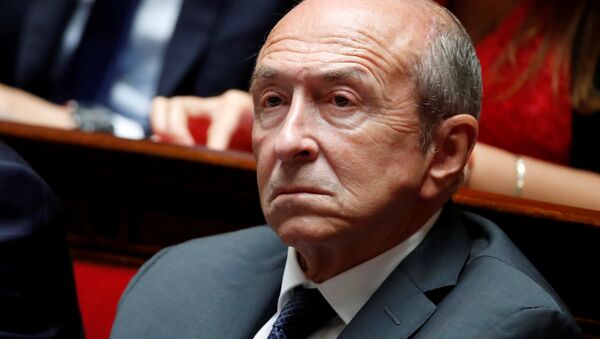 French President Emmanuel Macron has suffered a blow to his presidency with the announcement that his interior minister, Gerard Collomb, will resign next year. Sputnik spoke to Professor Paul Smith at the University of Nottingham to get his take on this string of resignations in the French government, and how it has affected Macron's popularity.

Sputnik: Why have we seen three of Macron’s ministers resigning in the space of a month?

Dr Paul Smith: I think it’s very odd; even the French media have caught this kind of ‘flu’ as it were, that everything that goes wrong is clearly a weakness in Macron and the system. For me, it’s perfectly logical that someone like Collomb would do that – it’s a staged withdrawal from cabinet; he’s not resigned over a key issue, he’s announced that he will be standing down. We’re going to see a number of key figures among Macron supporters leading the electoral fight in municipal elections – in Paris, in Bordeaux, in Marseille. In all of these cities Macron needs his heavyweights to be deployed and because Collomb is well-established in Lyon – he used to be mayor of the city and also senator for the department; he has the contacts and he has the reputation. So I think there’s a kind of blindness in the media to see any kind of weakness. I see it as a very canny strategy.

French Interior Minister to Quit, Run for Mayor in Lyon Amid Criticism of Macron
Sputnik: However, it’s also true that Donald Trump’s poll ratings are better than Macron’s – a Kantar Sofres Onepoint poll published on Monday found that only 19% of French people had a positive view of Macron, 60% expressed a negative opinion – quite a drop since his time of election;  what do you think the main reason for this is?

Dr Paul Smith: I think the problem for Macron is that as yet, nobody is really seeing any kinds of benefits from the reforms he has introduced. But he is developing… The political system is much more… There is a much more vigorous opposition – there’s a lot of opposition to Donald Trump, but it’s not organized – there’s a much more vigorous opposition in terms of trade unions and political parties. Not that that opposition is particularly unified in France, but there are a lot of different places where people can express their opposition and so that’s filtering through. So I think the problem is (France is) a year and a half into quite a significant reform program, and it’s yet to yield the returns. I think also, you can’t get away from the fact that Macron comes out with statements sometimes and you really wonder what he was thinking when he said it.

Macron's Cabinet Reshuffle Heavy Blow to His 'Clean Hands' Image, Analysts Say
Sputnik: To what extent do you think the Benalla scandal has affected him and will continue to affect the President’s popularity?

Dr Paul Smith: I think it has affected him. Benalla himself has turned out to be something of a slippery character in the sense that today, in his hearing before the (French) Senate commission, he was full of contrition and full of careful explanations and so forth, and in previous interviews he’s been much more aggressive and much more forthright. I think people are trying to get their heads around exactly who this person is. I think it did Macron harm back in the spring and the summer. I think now the French public are beginning to get a bit frustrated by what’s going on. But the questions that are being asked of him by the Senate commission are still pertinent questions; and the affair will drag on.