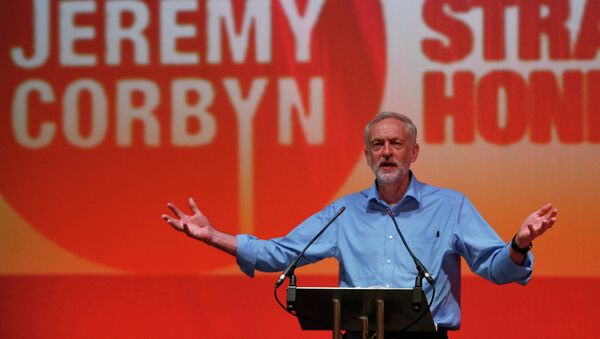 A former chief rabbi has accused Jeremy Corbyn of the most offensive comments by a senior politician since Enoch Powell, after his criticism of British Zionists. Jonathan Sacks made the most outspoken attack yet on the Labour leader, branding him an anti-Semite who has given support to racists, terrorists and dealers of hate.

Lord Sacks said Mr Corbyn comments are the most divisive, hateful and, like Powell’s speech, it undermines the existence of an entire group of British citizens by depicting them as essentially alien. The latest condemnation deepens the crisis that has engulfed the Labour leader since his remarks at a pro-Palestinian event five years ago emerged last week.

Some Labour MPs reacted with horror, while Helen Grant, the Conservative MP, reported him to the parliamentary standards watchdog. Sputnik spoke to Political Consultant Annika Rothstein about the latest around Jeremy Corbyn.

Anti-Semitism Accusations Against Corbyn Seek to Harm Palestinians - JVL
Sputnik: What are your thoughts on Mr Sack’s comments about the Labour leader?

Annika Rothstein: I thought it was extremely poignant, Rabbi Sacks is known for being a very measured man, and he’s not one for hyperbolise. His words carry a lot of weight, they always do, but in this case it was a timely commenting what is a dire situation for British Jews.

Sputnik: What do you make of the whole situation surrounding Jeremy Corbyn?

What I’m shocked by is he keeps upping the ante and he’s able to say worse and worse things with little to no push back and the fact he himself doesn’t recognise the problem.

‘People’s Vote’ Campaign Group To Pressure Corbyn on Brexit Stance - Reports
He keeps reiterating the same anti-Semitic language is shocking to me. In the past month or so we’ve seen various public figures, such as JK Rowling, who’s been pushing back against anti-Semitism in Britain and taking on some of these people online and in real life as has Rabbi Sacks. It’s shocking to me that this has been to go on for as long as it has and he still holds this position.

Sputnik: Because of his lack of action, is this the end for him as leader of the labour party?

Annika Rothstein: For sure he should step down, that has been the case for a long time, but the fact he hasn’t and the fact that I can’t say unequivocal yes it’s impossible for him to become Prime Minister, that’s scary to me, because I just don’t know.

I’m not sure he’s made it impossible, I’m not sure people are sufficiently outraged over his anti-Semitic comments for him to be disqualified from that position.

Of course he should step down, there are a number of online petitions demanding him to do so, but I don’t see enough pushback and I’m scared to say that there seems to be something bigger at play here than just Jeremy Corbyn as he’s been able to do one thing after another.If it’s honouring dead terrorists or saying these incredible offensive about British Jews.

Views and opinions expressed in this article are those of Annika Rothstein and do not necessarily reflect those of Sputnik.