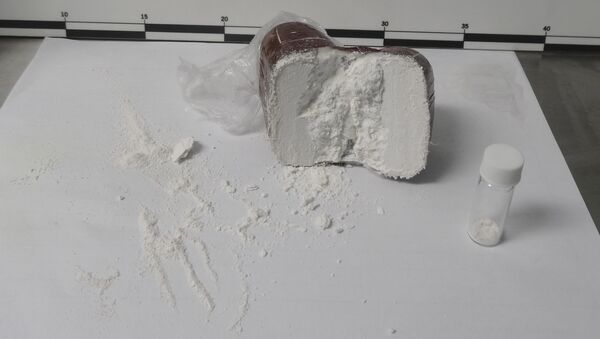 Radio Sputnik has discussed the high level of cocaine use in the UK with Fiona Measham, professor of Criminology in the Department of Sociology at Durham University.

According to the shadow home secretary, the UK Home office needs to carry out research to understand the causes of increased fatalities due to cocaine use. The statement comes following reports that the number of deaths from cocaine use has risen for the sixth year in a row.

Sputnik: The number of people using cocaine in UK is reported to be the highest across Europe. How could it be accounted for?

UK Hospital Medical Director Says Drug Availability Recruits More Addicts
Sputnik: Why has the price of cocaine come down then, so to speak? Is it just basic economic supply and demand? Is that the reason why it’s readily available and cheaper and more people are using it?

Fiona Measham: I think that one of the reasons is, whilst we’re seeing very high purity and very high levels of use, is that this is from a low starting point in and around 2010. We had amongst the lowest purity and most expensive cocaine around about 2010. So, there’s been this big increase in the past eight years, but that’s come after a slump up to that point. And I think one of the reasons why is, there are periods where the international police are more successful and there are times when they are less successful. And so we had a period around 2010 where very little cocaine was getting into the UK and that was also combined with the increase in so-called legal highs or new psychoactive substances that were being manufactured in China and then imported to the UK. So I think that there was a displacement, if you like; people from people taking cocaine which they weren’t particularly impressed with because it was low purity, so they shifted to taking these new psychoactive substances. And then I think another factor is that we’ve also got the dark web now. There are some people that are able to access some of these drugs via the Internet, via the dark web; and then they can have relatively high-purity drugs delivered to them to their doorstep. Sometimes it could be incepted by the authorities, but not necessarily always.

Sputnik: I think that this comes as a surprise because we always seem to think that the customs exercise people within the UK is very robust; why is it that procuring the drug is easier in the UK at the moment? Have you got any take on that?

Fiona Measham: I think the authorities are relatively robust, but it’s the shift scale of the number of small parcels or packages that come into the UK. It’s not possible to open and test every single package and so some will get through. Some will be apprehended, some will get through but I think that at the moment there’s a situation where the authorities can’t cope with the number of packages that are coming in from right around the world, some of which may have these new psychoactive substances. We have to remember that they can be very, very potent. So for the same affect you might have a substance which is only one-hundredth of the weight. So these can be very small packages which have high-purity drugs in them and they are much more difficult then for the authorities to identify and apprehend.

If You're Prisoner in UK and Don't Have a Drug Problem Yet, You Soon Will
Sputnik: It does appear that it is a massive challenge for the authorities like you say. Possession, production and supply of cocaine is punishable by law in the United Kingdom; is stricter legislation now required to tackle the cocaine business? And if so, what measures could you propose or what should be proposed to tackle this huge problem?

Fiona Measham: Across the UK at the moment, there is a relative amount of regional independence amongst the different police authorities. So they approach the problem in different ways. One of the things we’re seeing in some of the regions is really a separation between how cocaine dealers are treated and how cocaine users are treated. So we’re seeing a growing tolerance or liberal rating in relation to users, they might be directed toward treatments or services or interventions with more resources being focused on the suppliers and particularly on organized crime. So now we’re seeing the number of arrests and the number of users imprisoned falling, whereas the focus of resources is now on organized crime. I think there are various reasons for that, but a key one has been since 2010 a cut in policing. We’ve had a 20% cut in policing budgets, and more than 20,000 less police officers on the streets. So, the police themselves are having to think more carefully about how they spend their resources and they’re focusing those resources on organized crime rather than your sort of a very low-level street dealer or on the user.

UK Police Threaten Facebook Users With Arrest After Tiny Drug Bust is Mocked
Sputnik: What groups of people in the UK are more prone to the drug consumption in terms of age, gender and background? I would have thought it’s older teenagers-20-year age group; has anything changes? Is there other demographics coming into play now?

Fiona Measham: Generally, cocaine is used right across different socioeconomic groups, whereas for a drug like heroine is predominantly used by very low-income groups, unemployed, homeless and so on. So cocaine’s got a much broader demographic. One of the things that we’re seeing is that it’s got a new wave of popularity with this new higher purity. I think it waned in popularity probably five to ten years ago, partly because people realized when they were buying it, it was less than 20% cocaine. The word got out that you might buy cocaine, but there was no cocaine in it. And now the word is out again that cocaine does contain sometimes 70-90% purity, so it’s very high purity. We’re seeing the repercussions of that now. So we’re seeing increased hospital admissions, young people having heart problems and also we’ve got the highest cocaine-related deaths on record that we’ve ever had.