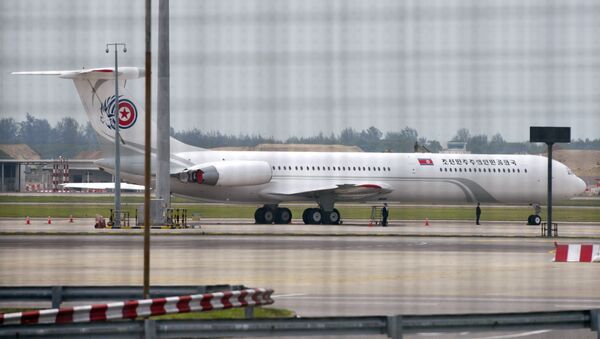 The Kremlin has announced that it’s not aware of an alleged arrival of a private aircraft of the North Korean leader to Russia’s Far East, a development which has already sparked speculation about Kim’s possible visit to the country.

An airliner used by Kim Jong-un and high-ranking North Korean government officials for overseas travel has recently made a brief stop in the Russian city of Vladivostok, Yonhap News Agency reports.

According to the media outlet, the airliner landed in the city and then departed for Pyongyang three hours later.

"There is no guarantee that Chairman Kim was on board just because the Chammae-1 moved,” a source cited by the news agency said, adding that apparently "North Korean officials have traveled there to make preparations for Kim's possible participation in the Eastern Economic Forum to be held in Vladivostok this September."

US Military-Industrial Complex ‘Doesn't Want Peace' with North Korea
When commenting on the media reports, the Kremlin and local officials said there were not aware of the plane's arrival.

"I cannot give any comments on this issue. We have no information," Kremlin spokesman Dmitry Peskov said.

A local government official also remarked that the regional administration is only aware of a Chinese delegation arriving on Monday “on their own plane,” while a representative of the North Korean consulate in Vladivostok added that they had no official information about Kim’s plane’s alleged arrival.

Earlier, Russian President Vladimir Putin confirmed his invitation for Kim Jong-un to visit Russia, saying that the talks could be held on the EEF sidelines or organized separately via diplomatic channels.