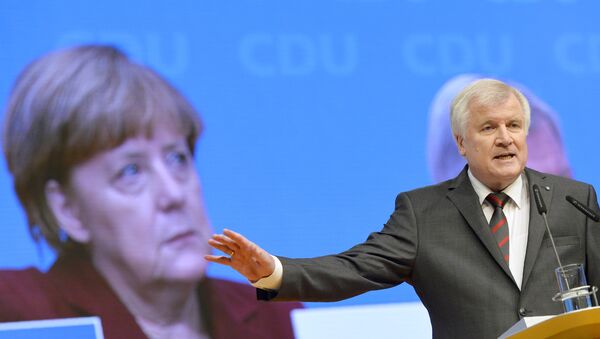 Vienna has vowed not to accept any agreements which come at Austria's expense amid a deal on migrant policy reached in neighboring Germany between Chancellor Angela Merkel and Interior Minister Horst Seehofer. Cloppenburg regional parliament MP Michael Klitzing says migration is just part of a much wider, possibly irresolvable problem for Merkel.

The CDU and CSU agreed this week to turn asylum seekers away at the German-Austrian border if they had already filed asylum applications in other states. The deal also envisions setting up transit centers to speed up deportations, and to look for a bilateral deal with Austria on the issue. Vienna responded by promising to protect itself if Berlin adopted the policy, with Austrian border patrol forces carrying out demonstrative training exercises last week. Austrian Interior Minister Herbert Kickl said that as far as he was concerned, the German agreement doesn't even exist, and it is difficult to imagine how it could work.

Austria Ready to Protect Its Borders if German Migrant Deal Becomes Gov’t Policy
Sputnik spoke to Michael Klitzinger, a regional lawmaker, to get a sense of the political atmosphere in Germany at the moment.

Sputnik: Seehofer and Merkel seemed to think that they had an agreement. Do you think that was just a political attempt to save face for both of them that really didn't solve any problems? Is that basically what is being said?

Michael Klitzinger: Perhaps [Jean-Claude] Juncker and Merkel hope that economic pressure on Austria will make a 'correction' in the Austrian course, but it's a fragile situation. Nothing is solved. Nothing is solved with the Eastern European countries regarding immigration, nothing is solved with the euro, with Brexit. And every new situation will bring new pressure. The German administration is finished. Everyone is glued to his or her chair, from Merkel to the regional level. [In Bavaria] they have regional elections in some months, and it's really important place for developments, because Seehofer is not finished, it seems.

Sputnik: What is it that Austria wants right now regarding immigration? Do you think that Berlin and Vienna could reach some kind of a compromise when Seehofer travels to the country?

Michael Klitzinger: If they do, it's not the solution for the whole situation with immigration; one [area] in this pressure is solved perhaps, but it's no solution for the immigration wave, given the reasons why [the migrants] leave their countries, which is the wars made by NATO and the Western militaries.

Merkel-Seehofer Dispute Signals EU ‘Political Crisis’, Not Migration Problem
Sputnik: What do you think Merkel needs to do right now? She had a very long discussion with Mr. Seehofer, and it took hours and hours for them to come to some kind of consensus.

Michael Klitzinger: She is just sitting on her chair, and waiting for anything big that happens now to keep the eyes of the world from herself. There's no prospect for her policy anymore in Germany.

Sputnik: So you don't see a future for her 'open door' immigration policy. That seems quite apparent and seems to have been the case for quite a while. But do you see Merkel compromising?

Michael Klitzinger: There was pressure from the CDU, her party and the biggest party in Germany. There was pressure from the members of parliament on her to give directions. She never gave directions. She waited, looking just like Juncker. Juncker said 'we do anything, look how people react to the situation, and then we do it, and when too many people are against it we don't do it.' They have no democratic system to plan her vision.

Merkel is against the wall; she has been driven to the wall, because this construction with the SPD, the CSU, Seehofer and Merkel will not last long.

Michael Klitzing is a member of the regional parliament in the Cloppenburg district in northern Germany from Die Links. The views expressed by Mr. Klitzing are those of the speaker, and do not necessarily reflect those of Sputnik.