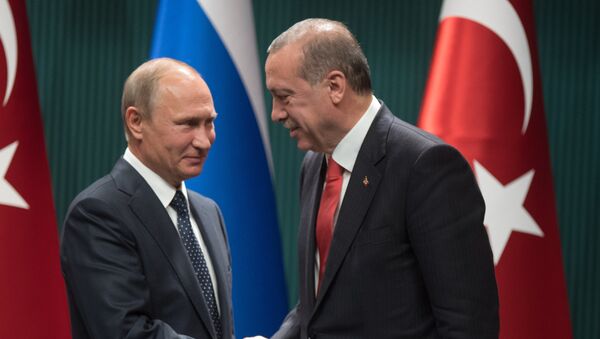 ISTANBUL (Sputnik) - Turkish President Recep Tayyip Erdogan said late on Friday Russia’s Vladimir Putin was one of the most experienced politicians in the UN General Assembly.

"Speaking about experience, there are two most experienced politicians in the UN General Assembly – I cannot think of anyone else – the first one is me and the other one is Putin," he told TRT World.

Turkey to Use Russia's S-400 Air Defense Systems If Necessary, Erdogan Says
Erdogan stressed they had both been in power for over a decade as presidents or prime ministers of their respective countries, and he boasted having "good, special ties" with the Russian leader.

Erdogan said this relationship helped Russia and Turkey initiate several rounds of talks with between the Syrian government and anti-government militants within the framework of the Astana process, and achieve good results in the fight against "terrorists" in Syria’s Kurdish-dominated northwest.

Turkey has designated the Kurdish People's Protection Units (YPG), a key armed group in Syria, as terrorists with ties to the Kurdistan Worker's Party (PKK), a separatist group which has been banned within Turkey.