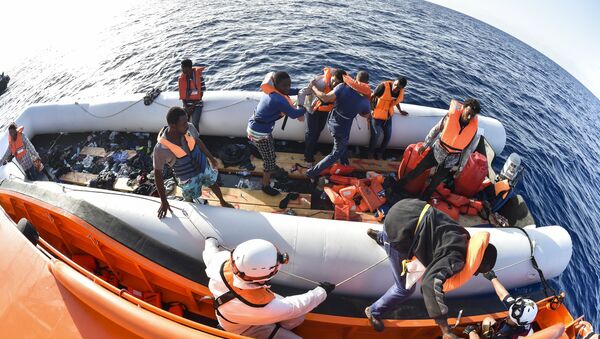 Italy cannot be Europe's refugee camp, new interior minister Matteo Salvini has said. The head of Eurosceptic Liga party traveled to the south of Sicily, one of Italy's main landing points for refugees. Even billionaire George Soros has written in the Corriere della Sera paper that the EU should compensate Italy for the migrants that land there.

Sputnik: We've heard from the newly appointed Interior Minister Matteo Salvini that Italy will not "take a hard line on immigration but one of common sense." How do you interpret that?

Andrew Lawford: I think that's going to be days, years in order to understand exactly what it is that he's talking about. But if we take a little bit more of the context of things that he said during the election campaign, I would expect that he's kind of trying to make a neat distinction between what we could rightfully call refugees and people who are migrating in order to seek better lives for themselves in Italy. And I know that all people that come here probably are seeking a better life. There's a neat distinction between people who are asylum seekers and people who are simply looking for a better place to live and I think that's probably going to be the focus at this stage.

Sputnik: Soros has come out and said that the influx of migrants has resulted in support for populist parties in the election. He's also said that Europe should compensate Italy for the migrants they do take on because Austria and France for instance have closed their borders to these migrants and then we see the migrants stuck in Italy. What is your viewpoint on the real situation in Italy as far as migrants? Do you feel that Italy is unfairly overburdened with migration issues?

Andrew Lawford: I think it probably is. I mean, obviously you just need to look at a map in order to understand why the burden of immigration in its first instance falls on countries like Italy because obviously it's one of the easiest places to get to if you're crossing the Mediterranean and a lot of the migrants arrive on the little island called Lampedusa which is the south of Sicily. And so it's definitely fair that the initial burden of migration has fallen on Italy and I think there's been a sort of structural problem there in terms of how the asylum seeking rules have been set up so that the asylum must be sought in the first country where the migrants arrive and this has led to Italy being one of those main countries.

The EU's Italy Headache: Crisis Averted or Crisis Deferred?
I agree with what Mr. Soros says about the fact that Italy should be compensated, but I think more than that what's lacking is a common sense approach from the European level as to what to do about migration because it's obviously a lot easier for a country simply to close its borders and if you travel across the border between Italy and France you do definitely perceive the fact that the border is now closed and that there are quite stringent checks going on. That's quite an easy thing for countries like France or the Northern European countries to do, is to sort of just avoid people migrating internally within the EU. It's a very difficult problem to solve overall, but I think it would definitely benefit from a more open and frank discussion between the EU partners and I think it would avoid or lessen the extent to which populist parties can be attractive for voters in the EU.

Sputnik: What are your thoughts regarding the Dublin Rule which does require refugees to file for asylum in the State that they arrive in? Is that part of the problem or is it in some way a solution?

Italian Migrant Crisis an 'Emergency for Citizens' With Huge Impact - Journalist
Andrew Lawford: This is definitely a solution for the countries that don't have the immigrants arriving on their shores. I think it is probably part of the problem and it needs to be addressed together with the wider issue of migrants; how people are dealt with as they arrive and really how they're getting here as well because people tend to forget that a lot of these migrants have spent thousands and thousands of dollars in order to arrive in Europe. And that money is generally spent with people who are providing trafficking services and it would be far more sensible to come and try and safe some kind of active recruitment for people that actually want to come to Europe rather than letting them arrive in terrible conditions and then sort of making the best of it when they get here. If there was a more comprehensive strategy I think it would be better for the migrants and it would be better for the countries that are hosting them.

Sputnik: Do you envision some kind of a serious redraft of the EU immigration policy and law in the near future because obviously there are so many different opinions, there are so many different voices and because of the rules like the Dublin Rule because of the geographics of it all you see such a varying level of countries being subjected to this crisis because of where they're located and so forth. And obviously something needs to be done because some countries are taking the brunt of the influx and some countries are actually quite open to receiving migrant whereas the trend has been in many countries criticism of the government for having very open policies.

Andrew Lawford: I think that's going to be the Italian push. I would imagine there's going to be probably a strategy were they are going to try and stop people arriving so that's going to be something which is going to happen. Probably, in direct consultations with countries like Liberia and Tunisia where the migrants depart from before getting to Europe in the first place. And I imagine that the EU's going to try and renegotiate the EU immigration rules. Whether or not they're going to get very far I don't know because it's a political football in Italy and I think that for a lot of the other countries in Europe if politicians are seen to be favoring immigration then that will weigh negatively on them. So it's difficult for me to see a comprehensive solution coming out of it but let's hope that if anything good comes from the rise of populist parties then maybe a renegotiation of these rules is part of it.