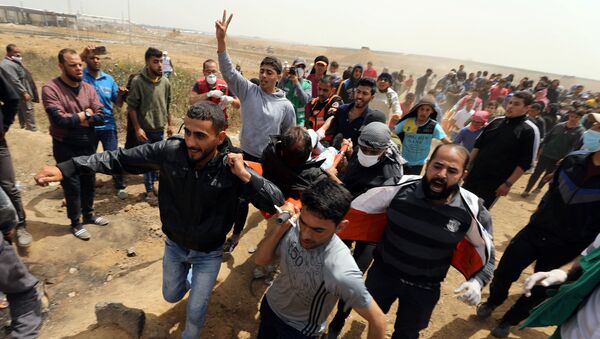 At least one Palestinian was killed and 167 wounded in protests on Friday along the Gaza border, according to the Gaza Health Ministry, as thousands of Gazans protest along the border in the seventh consecutive week of the "March of Return."

One of the wounded reported includes a journalist who sustained light injuries to his leg, near the fence in the southern town of Khan Yunis in the Gaza Strip.

Giant Palestinian kite flown over Gaza border into Israel as sign of protest amid ongoing Great March of Return. 15 Palestinians were injured today in most recent clashes with the Israeli Army in Eastern Gaza.inian. Photos by @Sputnik_Insight #Palestine #Israel #GreatReturnMarch pic.twitter.com/9JxQwKgJOW

​​The committee organizing the demonstration dubbed this week's protest "preparation and warning of what's to come," marking this as the last Friday before the so-called "March of Return" peaks on 14-15 of May, focusing on the U.S. embassy move to Jerusalem and commemorating Nakba day.

Erdogan Slams Int'l Community's Disregard for Palestinians Killed by Israel
Since March 30, Palestinians have been holding mass rallies near the Gaza Strip border, known as the Great March of Return. The demonstrators claim the right of return for Palestinians displaced during the 1948 war following the creation of Israel.

The Israeli military has retained a strong presence on the border to prevent Palestinian attempts to damage security infrastructure and violate Israel's sovereignty.

Dozens of protesters have been killed and over 1,000 others have been injured as Israeli forces have been suppressing the demonstrations with the use of force. The protesters intend to continue the march until May 15, when they will commemorate the 70th anniversary of the displacement.