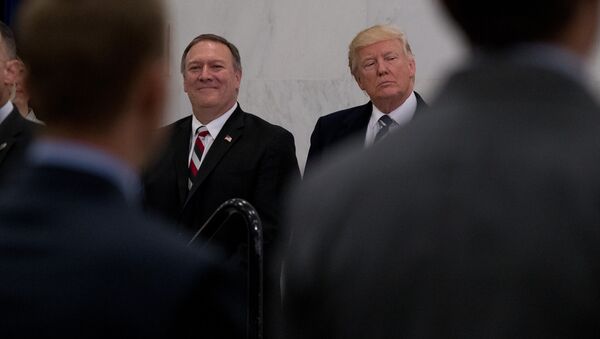 CIA director and nominee for secretary of state Mike Pompeo may not be the worst potential leader of US State Department when it comes to the well-being of its diplomatic corps as they struggle amid pressure from Donald Trump’s White House, which seems bent on destroying the department by cutting its budget and leaving key posts unfilled.

"Should he be confirmed as secretary of state, I would hope that he would be a person that would try to build back up the capabilities of the State Department, which we are definitely going to need on the issue of North Korea, the pending issue on whether the Trump administration is going to deep-six the Iran nuclear deal," anti-war activist Ann Wright, a retired colonel from the US Army, told Radio Sputnik's Loud & Clear program on Monday.

"Right now, professional diplomats are begging for help," she emphasized.

Pompeo has so far served in the Trump administration as the head of America's notorious spy agency, the CIA.

Pompeo's Nomination as US Secretary of State Approved by Senate Committee
"If you ask CIA people, which I have, they say that, politics aside, he's actually been a good manager, in that he has done all he can to back his people up and to argue their case before the oversight committees," said Loud & Clear host John Kiriakou, a veteran intelligence professional.