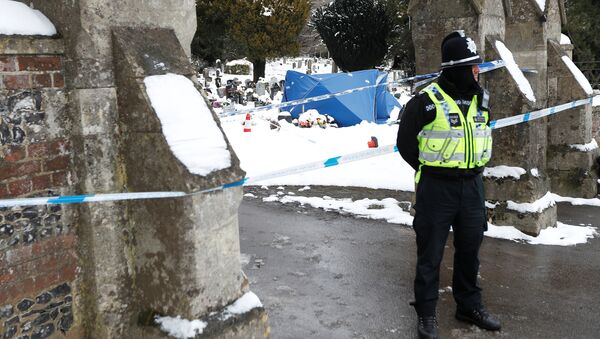 MOSCOW (Sputnik) - The United Kingdom is unwilling to accept the absence of chemical weapons in Russia in the situation around the poisoning of former GRU colonel Sergei Skripal, who worked for the UK intelligence, in the English city of Salisbury, Kremlin spokesman Dmitry Peskov said.

The spokesman stressed that Russia had destroyed its entire arsenal of the chemical weapons as it had been confirmed by the Organization for the Prohibition of Chemical Weapons (OPCW). He also noted that UK Ambassador to Russia Laurie Bristow had not attended a briefing for the foreign ambassadors in Russia convened by the Russian Foreign Ministry.

“We have not seen ambassador of Great Britain there. If Britain has questions, in this case, why would not the British ambassador come and hear the answers? As if they are asking questions not willing to get any answers. As if they ask questions having judgments prior to that. This is extremely unfair. This is extremely contradictory with international law, international principles of behavior and diplomacy. This is unwillingness to see the reality, I mean, the absence of chemical weapons in Russia,” Peskov said in an interview with RT news channel.

“These are artificially constructed theories. First, we have to remember, the starting point is words of President [Vladimir] Putin that Russia has nothing to do with this accident,” Peskov said in an interview with RT broadcaster when asked by a journalist about conspiracy theories about Russia’s alleged motives in the poisoning of Skripal.

The spokesman stressed that the United Kingdom’s claims were “crazy,” explaining his position through a comparison that he admitted being “very rude,” noting, nonetheless, that nothing “can be ruder than the reality.”

“Just imagine – Moscow city, a car accident, there’s a victim in the car accident. And we see what was the car. The car was a British-made car. Let’s say, a Range Rover. And just imagine, that myself or the Foreign Ministry spokeswoman makes a statement that a man was killed by a British-made car in a car accident in the center of Moscow and highly likely Prime Minister of Great Britain may be responsible for that murder,” Peskov said.

The Kremlin regrets EU decision to recall its ambassador from Moscow for consultations in light of the poisoning of former Russian double agent Sergei Skripal and his daughter in the United Kingdom.

"Of course, in this context we regret that such decisions and judgments use the wording 'highly likely.' We disagree with it, we repeat once again that Russia has nothing to do with the Skripal case," Peskov told reporters commenting on recalling of Ederer.

The spokesman added that the Kremlin was unaware of any arguments provided by London to the EU states on the Skripal case, because the United Kingdom had not provided them to Russia.

Russian Foreign Minister Sergei Lavrov also commented on the situation, saying that Russia had not seen any hard evidence to substantiate United Kingdom's allegations on the Skripal poisoning Skripal, so the accusations seemed like a provocation.

"We are still not seeing any facts. The lack thereof makes one think that all of this is a provocation, the investigation has not even finished yet," Lavrov told reporters.

According to the diplomat, London is busy trying to coax its allies into taking "confrontational steps"

"The goal is to make the crisis [in the relations] with Russia as deep as possible," the minister added.

“The statement adopted at the European Council meeting on March 22 in connection with the chemical attack in Salisbury is regrettable. The wording used by the European Union, which puts the blame in Russia just based on the fact that ‘there is no plausible alternative explanation,’ is in fact an unfounded accusation against us,” Kozhin told a briefing.

EU Council Wants NATO Cooperation Amid Skripal Poisoning Scandal
Skripal and his daughter have been in hospital in a critical condition since March 4 and are being treated for exposure to what the UK experts believe to be the A234 nerve agent. The UK side claimed that this substance was related to the Novichok class nerve agents developed in the Soviet Union. UK Prime Minister Theresa May has accused Russia of orchestrating the attack on the former intelligence officer and expelled 23 Russian diplomats as a punitive measure.

The European Council has sided with London in claiming that it is "highly likely that the Russian Federation is responsible and that there is no plausible alternative explanation" and condemned the incident as a "grave challenge to our shared security."