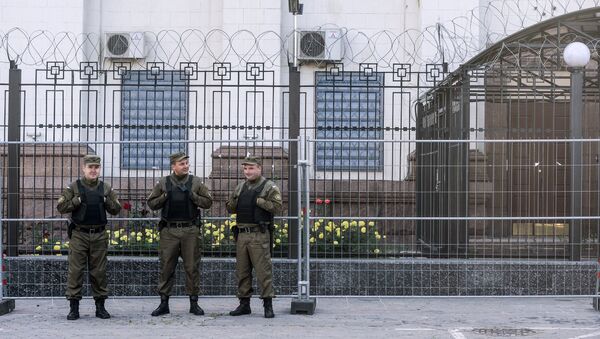 On March 18, the presidential election in Russia is set to take place, but Ukraine won't let Russian citizens vote in diplomatic offices in the country, which contradicts a practice that is common all over the world.

Kiev considers the presidential election in Russia illegal because it will take place in Crimea, among other regions, a statement of the Ukrainian Ministry of the Interior said.

For this reason, Kiev has decided to ban all Russians residing in Ukraine from voting at embassies and consulates on the territory of the country, the announcement published on Facebook by Ukrainian Interior Minister Arsen Avakov, read.

Ukrainian police will guard Russian diplomatic offices on the election day and only those who have diplomatic status will be able to go inside.

"The ministry calls on Russian diplomats and citizens to comply with the legitimate demands of Ukraine, refrain from provocations and follow the Ukrainian order and laws," the statement said.

Crimea rejoined Russia after a 2014 referendum. Almost 97 percent of the region's population voted in favor of reunification. Sevastopol, which has a federal city status, supported the move with 95.6 percent of votes. Kiev did not recognize the move and considers the peninsula to be an occupied territory. The referendum was held after a coup in Ukraine in February 2014.