Even Without Tech, Most People Admit Russia 'Cannot Be Messed With' - Analyst 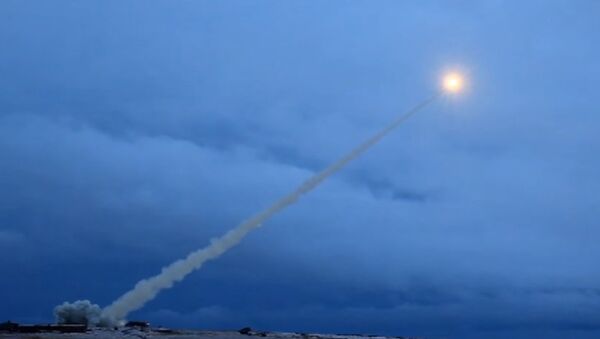 © Photo : Youtube / Минобороны России
Subscribe
President Vladimir Putin said during his address to the Federal Assembly that Russia had developed a new invincible cruise missile. He also said that any use of nuclear weapons against Russia or its allies will trigger an immediate response. Sputnik discussed this with Doug Wead, an American political analyst and New York Times bestselling author.

Sputnik: What are your thoughts on President Putin’s speech? Did anything that he said come as a surprise to you?

Doug Wead: I'm not surprised that Russia has developed the technology, but I'm surprised by the announcement and that this is the direction they would feel they need to go. I'm not surprised by the technology, because all along those of us here in the United States, who really studied the issue, had seen the Russian technological abilities far greater than most Americans acknowledge. President Barack Obama, for example, famously said — “Russia's only a regional power” and the next day an American astronaut had to be ferried back to Earth from the Space Station by a Russian spacecraft. There are documentaries also available on American TV for those who want to see them, that show that the Musk rocket was developed from technology that was taken from the former Soviet Union after the collapse, so I wasn't surprised by the technology.

Sputnik: Vladimir Putin focused a lot of the new defense systems, he said that Russia was creating systems in response to, of course, the US military build-up, which would eventually render Russia's nuclear arsenal pointless, unless Moscow acts and acts now, I suppose the timing was important, what's your take on that?

Doug Wead: You just don't wake up the next morning and have this technological capability, it takes years of planning and thought, so I'm going to try to figure out in my own amateur way how long it would have taken Russia to develop some of these technological abilities and then backtrack, when was it, what was going on when the Russian Government decided we need to pursue this, it could have been three years ago, five years ago, but it certainly wasn't six months ago.

Animation of Discord: US State Department Offended by Clip During Putin's Speech
Sputnik: Regarding the dire situation in US-Russia relations, Vladimir Putin also noted that the US had rejected all joint work suggested by Moscow, is there any hope that this will change any time soon, or can it go from bad to worse?

Doug Wead: I think there's hope because of the exchange of the citizens. Russian citizens are coming to America, American citizens are going to Russia, they get to know each other, they laugh together, they have dinner together, they appreciate the different personalities of the two countries, and there are just many friends I have here in the United States who just love the Russian people, the Cold War is just over, and there are some politicians who have an advantage in trying to revive it and they see a political advantage to do that, so I think there is hope, I think there's hope because of the people.

Sputnik: What consequences could Vladimir Putin's speech in general and this highlight on the creating new defense systems and Russia's arsenal have on Russia's ties with the US and the EU?

Doug Wead: Well, it depends on what Putin wants and it depends on what happens. Even without this announcement of this technology, most people acknowledge that Russia cannot be messed with, that it's one of the greatest nuclear powers on Earth and there's just no threat to Russia, nor has there ever been a threat to Russia from the West. I say that, although, having many Russian friends, I know it would not seem that way, throughout its long history Russia's been threatened from every side, so it has been a nation that had to be prepared to survive. I recognize that there's a different viewpoint in America and Russia on Russia's vulnerability, I personally don't see it as vulnerable, I see the West is respecting Russia's territorial claims, there are misunderstandings and they are severe, it could lead to war, but look at World War One a lot of people didn't want that to happen and it happened anyway, so you can stumble into war and it would be a terrible thing with all these nuclear weapons, but there's certainly hope, you asked if there's hope —  yes, indeed, there is.

The views and opinions expressed by Doug Wead are those of the speaker and do not necessarily reflect those of Sputnik.