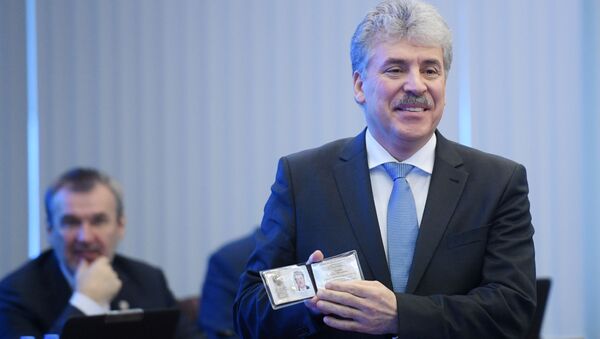 "We have repeatedly stated that we did not agree with the organization of the TV debates. The decision about the format and time of the debates has been taken without discussions with the presidential candidates and their representatives … The different views, the different programs [of the candidates] – this should be discussed live on prime time. We have decided to address the CEC officially and the TV channels’ heads once again," Grudinin wrote on Instagram.

Grudinin noted that the Russian presidential candidates had discussed this issue after the debates on Tuesday. All the candidates endorsed the decision to appeal to the CEC and TV channels on shifting the debates to peak viewing time, Grudinin added.

Earlier in February, liberal Civil Initiative party candidate Ksenia Sobchak filed a complaint with the CEC about airing debates at 8 a.m. Moscow time [05:00 GMT] instead of prime time in the afternoon.

Grudinin, in turn, has sent a statement to the heads of Russia's Channel One and Rossiya 1 TV broadcasters stating his discontent about the organization and time of the debates.

The Russian presidential election is set for March 18, while the debates started on Monday.

READ MORE: Total of 400 Polling Places Set Up Outside Russia for Election — Commission

Apart from Grudinin and Sobchak, the list of candidates running for president this year comprises Sergei Baburin from the right-wing All-People's Union party; incumbent President Vladimir Putin, who is running as an independent candidate; head of the Liberal Democratic Party of Russia Vladimir Zhirinovsky; the Communists of Russia party Chairman Maxim Suraykin; commissioner for entrepreneurs' rights and nominee of the center-right Party of Growth Boris Titov and Grigory Yavlinsky, the co-founder of the Yabloko Party.

Putin’s campaign team has refused to use the free-of-charge air time, designated for him as part of the campaign like the other presidential candidates.