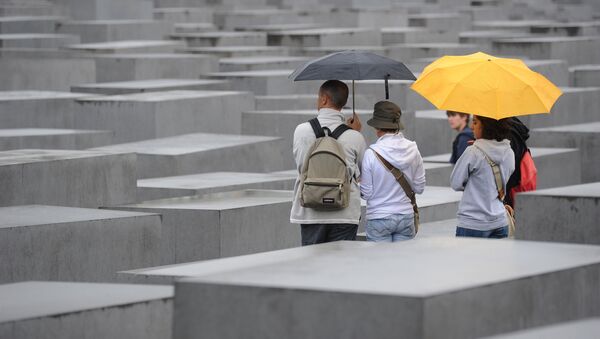 Most of the crimes were committed by people with far-right sympathies and members of right-wing extremist groups, according to local media.

Anti-Semitic sentiments in Germany are widespread, which has been shown in a recent report on crimes against Jews.

German police registered 1,451 such crimes in the country last year, the German newspaper Tagesspiegel reported, referring to data from the German government.

Among the crimes, there were 32 acts of violence, 160 cases of property damage and 898 hate incitement incidents.

Some 95 percent of the crimes were prompted by right-wing sentiments of the perpetrators, police stated.

The German authorities say that the figures might be even higher, since the information provided by federal states is not yet complete.

Earlier, in December 2017, German Interior Minister Thomas de Maizière came up with a proposal to establish a post for a special representative on anti-Semitism.

"Any anti-Semitic offense is… a shame for our country," de Maizière said, adding that "anti-Semitism must never again take hold in Germany."

For his part, German President Frank-Walter Steinmeier admitted the same month that anti-Semitism has yet to be tackled in Germany.

'Evil Face': President Steinmeier Warns Against Anti-Semitism in Germany
He noted that historically, Germany was responsible for the Nazi holocaust, and insisted that the onus of this should be felt by each and every German citizen.

Both statements came amid renewed tensions between Palestinians and Israelis and major anti-Israel protests in Berlin triggered by the decision of US President Donald Trump to recognize Jerusalem as the capital of Israel in December last year.

The city has been contested by both sides since the Six-Day War in 1967, after which Israel gained control over the holy city of the three Abrahamic religions.

The move also provoked protests in Islamic countries across the Middle East and Muslim communities worldwide.