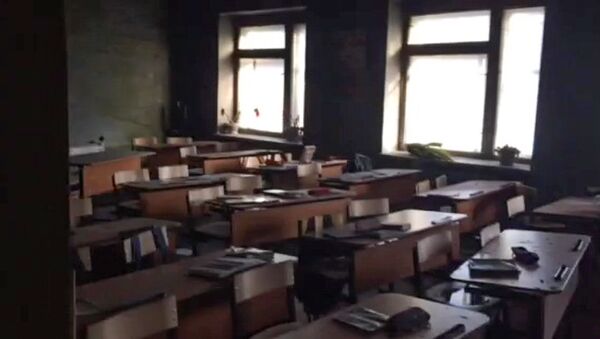 © Investigation department of the Investigative Committee of the Russian Federation on the Republic of Buryatia
/
Go to the photo bank
Subscribe
MOSCOW (Sputnik) - A teenage student was detained early Friday on suspicion of staging an axe and arson attack at a school near the southern Russian city of Ulan Ude, the regional investigative committee said.

"A criminal investigation has been opened into a school student on suspicion of… attempting the murder of two or more minors," the statement read.

Investigators said they suspected that the ninth-grade student had attacked seventh-graders with an axe at a school in the village of Sosnovy Bor on Ulan Ude outskirts in the Buryatia region. He also threw a Molotov cocktail into a classroom and started a fire.

Three students and their teacher were injured, the committee said, adding that the teen's motive was not clear. The committee stressed it would look into actions by school authorities whose task was to ensure security.

The regional emergencies ministry confirmed that a blaze had taken place at the school. The flames had been put out and more than 500 people had been evacuated. It said no one was injured in the fire. A source told Sputnik earlier that the attack was staged by three people posing as students.

The regional governor, Alexei Tsydenov, has interrupted his work trip to Mongolia and is on the way back, authorities said. Several senior officials, including the deputy governor, are likewise on their way to the village.