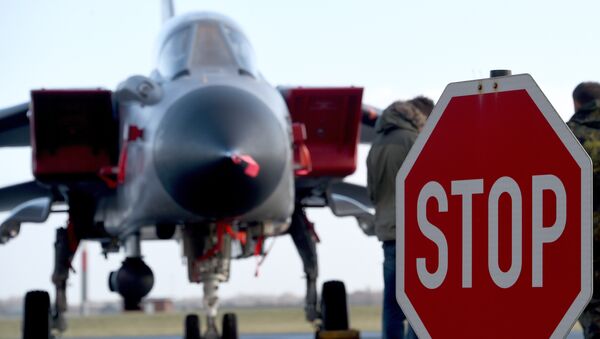 MOSCOW (Sputnik) – Germany intends to continue taking part in the anti-Daesh US-led coalition in Syria and Iraq, as the country's contribution in terms of reconnaissance and plane refueling services is important to the anti-Daesh effort despite the terrorist group's recent military defeat, a spokesman of the German Defense Ministry told Sputnik.

Earlier in the day, Australian Defense Minister Marise Payne declared an end of the nation’s airstrike operations as part of the US-led coalition after consultations with Iraq, but admitted that the challenge was not over yet. Australia's Operation Okra involved the deployment of some 780 troops in the Middle East, with only the Air Task Group involved in airstrikes against the Daesh in Iraq and Syria.

"The international coalition has achieved great successes in the fight against Daesh, however, the Daesh still has areas of retreat in the region. Therefore, it remains important to support the coalition with our Tornado [jets] reconnaissance products and air refueling," the spokesman said, asked if Germany was considering following Australia in ending its participation in the US-led coalition operations.

The spokesman also recalled that last week the German parliament had agreed to extend the mandate on the country’s support of the US-led coalition’s operations against the Daesh terrorists until March 31, 2018.

Germany does not participate in the US-led coalition’s airstrikes, but helps its military campaigns with Tornado reconnaissance jets, refueling aircraft and up to 1,200 military personnel.

The coalition has been involved in Iraq and Syria since 2014. The Syrian government did not authorize the coalition's troops to operate in the country. Russia has also been involved in the Middle Eastern anti-terror effort, going into Syria in 2015 at the request of Damascus.

Earlier in December, Russian President Vladimir Putin ordered to start the withdrawal of a significant part of the Russian troops from Syria only several days after he announced a "complete" victory over the Daesh in the country. US President Donald Trump announced the defeat of the Daesh several days later and claimed that the United States was chiefly responsible for the victory.