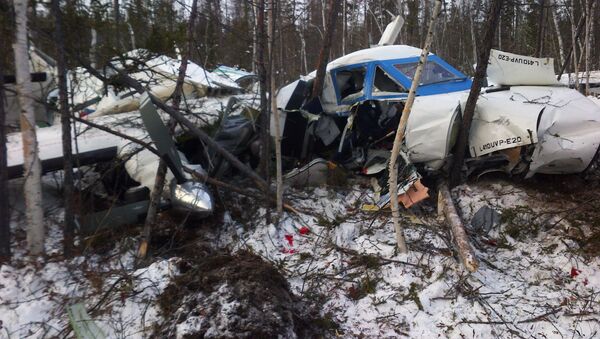 A Let L-410 aircraft has crashed while landing in Russia's Khabarovsk territory near the Nelkan settlement.

The L-410 passenger aircraft made a hard landing resulting in the destruction of its fuselage at Russia's Nelkan airport on Tuesday. The airplane was en route from Khabarovsk, a source at the regional emergency services told Sputnik. There were two pilots and five passengers on board, including one child.

The source reported that six people were killed and the child, according to preliminary data, has survived the crash. The girl was taken out of the plane and transferred to hospital in critical condition.

The Russian Investigative Committee is going to look into three versions that could have caused the plane of a local aviation company, Khabarovsk Airlines to crash: bad weather conditions, possible crew error or technical malfunction.

READ MORE: Three Scientists Were Among 8 People Aboard Helicopter Crashed Off Spitsbergen

However, the Far East Hydrometeorological Center has reported that weather conditions in the Nelkan settlement were good and that there was no fog.