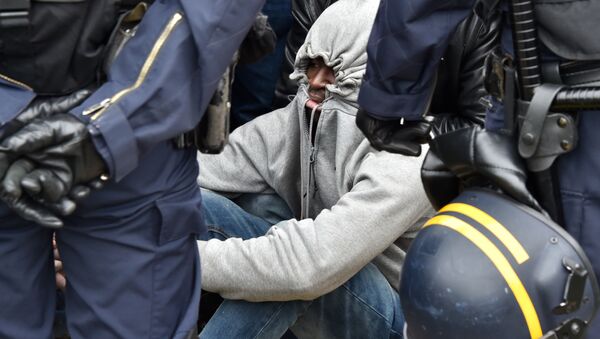 © AFP 2022 / PHILIPPE HUGUEN
Subscribe
French President Emmanuel Macron has vowed to "take the most severe measures" against migrant criminals, saying that foreigners who commit crimes should not only be sentenced but deported. Political observers Michel Taube and Jean-Paul Gourevitch tell Sputnik what the president's apparent rightward swing means for French politics.

In a recent televised interview, Macron vowed to get tough on criminal foreigners by deporting them. The remarks come amid continued controversy over a stabbing attack in Lyon involving Ahmed Hanachi, a Tunisian man who had been put into custody by police for shoplifting just two days before the attack, but allowed to walk free the next day.

Observers are divided about what to make of the president's promise, some speculating that it is an attempt to raise flagging approval ratings, and others saying it may be a genuine effort to tighten overly lax immigration laws, an issue which featured prominently in Macron's election manifesto.

Tables Turned
Critics, however, have accused Macron of pandering to the far right, and have said that the tough stance on immigration he is proposing contradicts European humanitarian values.

Asked what's really going on, writer and journalist Michel Taube, the founder of Opinion Internationale, a French political news resource, told Sputnik France that Macron's remarks fit into the general trend of a 'rightward drift' in European politics, particularly on the issue of immigration.

"I think that Macron's statements take into account the profound changes which are taking place in Europe at the moment," Taube explained. "He is forced to take into account changes in French public opinion. Like the rest of us, he can clearly see that the consequence of the mass inflow of migrants is the growth in the electorate of extreme right wing parties – whether in France or Austria. In Germany, for the first time since 1945, an extreme right wing party [recently] won seats in the Bundestag." 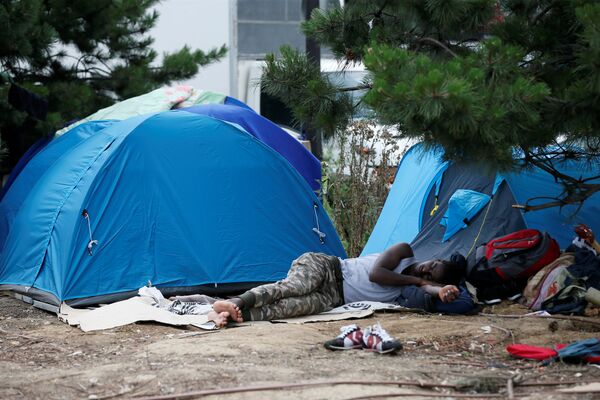 A migrant sleeps next to tents installed in a street near the entrance of the reception center for migrants and refugees at porte de La Chapelle, north of Paris, France, July 6, 2017
© REUTERS / Gonzalo Fuentes

In reality, the observer noted, it will be very difficult for the French president to follow through with his promises, and to expel hundreds or even thousands of convicted criminal immigrants. "The reason is simple: their home countries will almost certainly refuse to accept their expelled citizens so quickly."

Macron's predecessor's efforts serve as a perfect example of why things like this are so difficult to achieve, Taube said. "Do you remember Francois Hollande's [failed] proposal to deprive dual citizen foreign terrorists of their French citizenship? Macron's proposal here is very reminiscent of this. It's odd that he persists in saying that he is neither 'left nor right'; it's becoming more and more clear that he leans to the right."

Taube doesn't believe that Macron's remarks are any sort of ploy to appeal to the far right, since France's next presidential elections are years away. "And it didn't seem to me that the president's statement about the need to expel immigrant criminals somehow shocked public opinion," the observer added. "Apart from Le Monde, the media did not even really react to this fairly firm and quite right wing proposal."

French Unions Rally Against Macron's Economic Reforms in Paris (VIDEO, PHOTO)
Jean-Paul Gourevitch, French author and specialist in the fields of immigration and radical Islam, told Sputnik that he is doubtful about Macron's chances in actually tightening policy on illegal immigration, including as it relates to criminals.

"Macron has gotten himself involved in a serious confrontation, and I'm not sure that he will be able to achieve his goal. In the first quarter of 2018, a corresponding law should be adopted, but I think the decision [on migrant criminals] will only remain on paper."

In a speech during a meeting with prefects last month, the president announced that the government was preparing a full review of France's asylum and immigration policy, to be unveiled early next year. 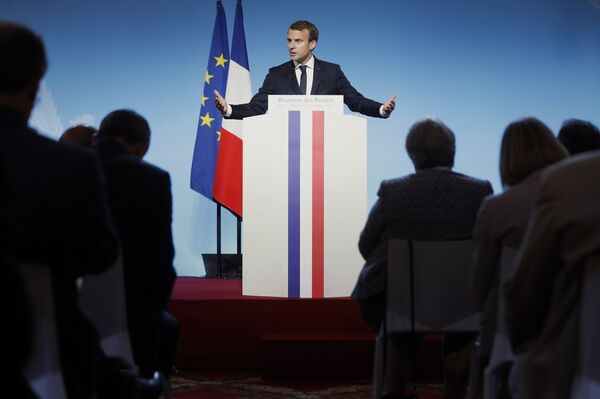 French President Emmanuel Macron delivers a speech at the Elysee Palace in Paris during the Prefects Reunion on September 5, 2017
© AFP 2022 / ETIENNE LAURENT/POOL

"Macron has said that it would be necessary to expel all migrants who had been refused asylum, but if you look at the figures by the Chamber of Accounts, such cases account to only 4% of the total," Gourevitch noted. (Under French law, migrants who have applied for asylum are no longer considered illegal migrants, and are entitled to stay temporarily. The two kinds of migrants that are considered illegal are those who arrive illegally or those who refuse to apply for refugee status.)

Nevertheless, Gourevitch agreed with his colleague that Macron's apparent rightward shift is an indication of a broader European trend.

"Many European countries' position on illegal immigration is becoming tougher," the observer noted. "Macron wants to follow the German example. Great, let's take a look at it. In 2016, the 'German example' consisted of a doors-wide-open policy. Today, Merkel has decided that Germany can receive only 200,000 migrants a year. And in the first quarter of 2017, Berlin expelled over 12,000 migrants from the country – that's more than France has for the whole year." 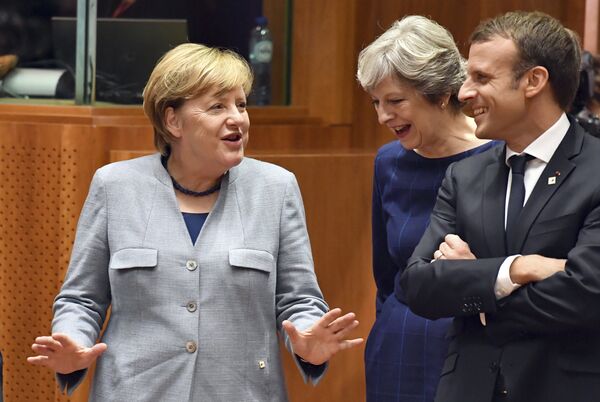 Like Taube, Gourevitch said that the biggest problem with deportation is that many countries do not allow for the easy return of their citizens. "Ideally, the French reaction should be simple: if you do not take back your illegal migrants, we will reduce your development subsidies. But in reality, life isn't so simple. Doing something like this would cause problems both within these countries, and among French public opinion."

France's far right wing, so far, have reacted to Macron's initiative with skepticism and derision.

​Emmanuelle Menard, National Front deputy at the French National Assembly: "Macron is saying that he is going to send all the illegal migrants who committed crimes back home. Double dare you!"

​Nicolas Bay, National Front deputy leader and member of European Parliament: "Macron refuses to expel illegal immigrants who have not committed crimes. But they are all outlaws!"