US Media Are on the 'Radar': Moscow is Mulling to Update 'Foreign Agent' List 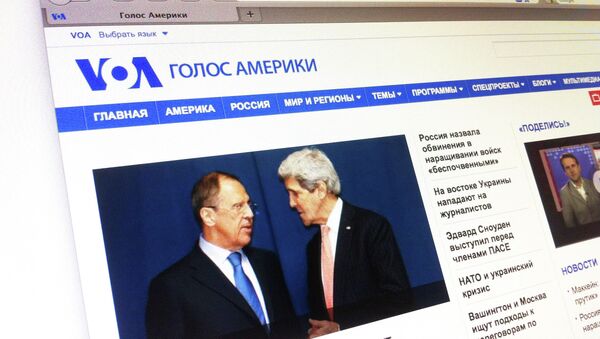 © Sputnik
Subscribe
International
India
Africa
The Russian senior lawmaker Andrei Klimov told Sputnik that the existing 'foreign agent' list might be updated with a number of US media outlets by the end of the year. Klimov pointed out that the Voice of America and Radio Liberty are currently on the "Radar".

MOSCOW (Sputnik) — Head of Russia’s Federation Council Commission on protection of state sovereignty Andrei Klimov told Sputnik that a range of other US media outlets operating in Russia might appear on the list of "foreign agents."

Klimov said that "it is possible that other US media [subject to foreign agent restrictions] would emerge."

The lawmaker explained that there were about 40 US media operating in Russia, and "attention may be drawn to, first and foremost, the media outlets that are partly financed from the US budget."

FBI's 'Foreign Agent' Probe Into Sputnik is 'Direct Threat to Press Freedom'
Earlier in the day, a source in the Russian government told Sputnik that Russia's Justice Ministry had sent a notice on the possibility of expanding the list of foreign agents to a number of US media outlets including Voice of America and Radio Liberty. The lawmakers may expand the criteria for inclusion in this category, as well as introduce the possibility to recognize individuals receiving external financing as foreign agents. Subsequently, some US media may be asked to register as foreign agents with all that it implies.

"These two US media [Voice of America and Radio Liberty] were on the radar of our commission. They are carrying out the blatant propaganda in our country for the money from the budget of the United States," Klimov stressed.

"If there is such a need, we are ready to promptly develop and introduce appropriate changes to the current legislation. It is technically possible to do it before the year-end," Klimov told Sputnik.

US Probe Into RT, Sputnik: FARA May Not be Bad Until There is 'Suppression'
According to the lawmaker, new laws are not needed, just amendments to the existing laws, in particular, the Law on mass media, as well as the Criminal and the Administrative Codes. Klimov also stressed that changes in the current legislation would be developed and introduced if the relevant ministries and agencies consider it necessary.

In July 2012, the Russian parliament adopted a law requiring non-governmental organizations (NGOs) that were engaged in political activities and receive funding from abroad to register as "foreign agents" and to label all their publications as such. The law went into effect in November 2012. Commenting on the law, Russian President Vladimir Putin said such a measure was needed to limit direct and indirect foreign interference as well as lobbying in the country.

In June 2014, Putin signed a bill, which authorizes the Justice Ministry to put NGOs into "foreign agents" list, however, this decision can be appealed in a court.

As of June 2017, over 90 NGOs operating in Russia were put into "foreign agents" list, according to the Russian Prosecutor General's Office.