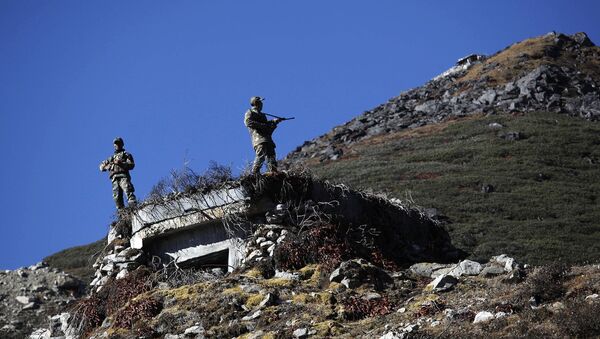 © AP Photo / Anupam Nath
Subscribe
India and China have agreed on an accelerated disengagement of troops in the disputed area of Doklam, the Indian Ministry of External Affairs (MEA) said in a statement Monday.

India’s Ministry of External Affairs stated that India and China have agreed for expeditious disengagement on the Doklam plateau, ending a military face-off of almost three months.

"In recent weeks, India and China have maintained diplomatic communication in respect of the incident at Doklam. During these communications, we were able to express our views and convey our concerns and interests. On this basis, expeditious disengagement of border personnel at the face-off site in Doklam has been agreed-to and is ongoing," the statement said.

Doklam Standoff: Neither China, Nor India Want Conflict or War
The breakthrough comes just ahead of Indian Prime Minister Narendra Modi’s visit to China for the Brazil-Russia-India-China-South Africa (BRICS) summit in Xiamen.

"All of India’s servicemen and military equipment, which illegally crossed the border, were withdrawn back behind their border," Hua said at the press briefing.

The spokeswoman noted that China will continue to undertake all necessary measures to ensure its territorial integrity and sovereignty.

India and China have been locked in a border standoff since mid-June. The confrontation started after Indian troops blocked road construction being carried out by China in the disputed area of Doklam (Donglang).

000000
Popular comments
Wise decision, Pentagram & CIA are gnashing their teeth's. Problem still remains though, since the Modi regime in India is far too unpredictable and unwise enough to corner themselves with the US.