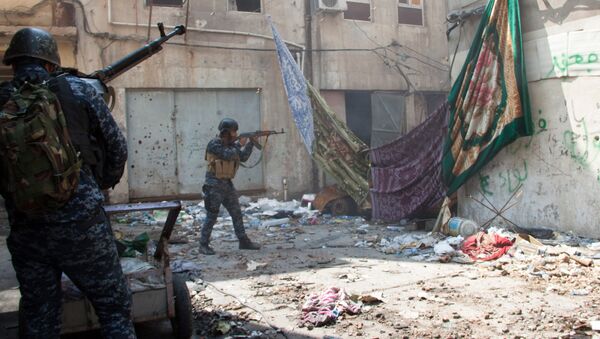 MOSCOW (Sputnik) – Previously director of the Department on New Challenges and Threats of the Russian Foreign Ministry stated that Russia has offered the US to co-sponsor a UN Security Council resolution that introduces a full trade and economic embargo on Daesh, seen as the most efficient way to cut the financing of the terrorists.

"I am sure that after the serious blow on terrorists both in Syria and Iraq, the cooperation under the center’s activities will be much-in-demand to counteract ‘sleeper cells’ of the IS [Daesh terror group, outlawed in Russia] that were created in the two countries, as well as transfer of terrorists to other states," Maksimov said.

He pointed out that the work under the framework of the four-party coordination center in Baghdad "has not only proved its value but also has significant potential for boosting counterterrorism cooperation."

The center for sharing and analysis of intelligence data on the situation in the Middle East, particularly on jihadists in the region, was created in Baghdad by the four states in 2015.

Some experts say that Iraqi Prime Minister Haider al-Abadi may be concerned over the recent Trump's standoff with Iran, Iraq's ally and partner. Moreover, they note that Trump would hardly be able to destroy Daesh if he does not cooperate with Muslim countries, such as Iran and Iraq, and also Russia.