Car Plows Into Crowd At Cafe Outside Paris 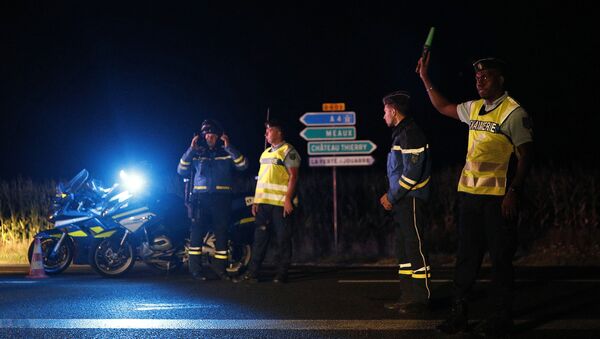 © AP Photo / Kamil Zihnioglu
Subscribe
One person was killed and dozen injured after a driver struck a group of patrons outside a cafe in a region east of Paris Monday evening.

An twelve-year-old girl was killed in the BMW attack, and 12 were injured, four seriously, according to France's Interior Ministry. The attack took place at a pizzeria in Sept-Sorts, about an hour from Paris, French media outlets report.

The assailant has been detained by French police. "There is no doubt that he voluntarily decided to create what happened," prosecutor Eric de Valroger told reporters from the crime scene. Police have excluded terrorism as a motivation for the attack and are pursuing the case as a homicide investigation.

The Guardian reports that a witness to the event said the driver attempted to reverse, but was stopped.

"A car drove into the terrace and crashed into the bar," the witness explained. "The driver tried to reverse but someone stopped them. The gendarmes arrived quickly. There were around 20 people in the restaurant."

On December 19, a truck was weaponized in Berlin and used to run over a crowd at a Christmas market, killing a dozen people. Police eventually determined that the attack was purposeful, and terrorism analysts have since drawn comparisons between the Berlin market attack in 2016 to the deadly truck attack in Nice, France, which claimed the lives of more than 80 people watching fireworks on Bastille Day.

Over the weekend a car was used to commit murder in Charlottesville, Virginia. The driver, allegedly a white supremacist, killed 32-year-old Heather Heyer, a counter protester to the white nationalist rally held in the city. "With many armed militia present, we thought bullets might be a problem," Charlottesville-based editor Hawes Spencer told Axios, "but as it turned out, it was just like European terrorism: a car aimed at pedestrians."