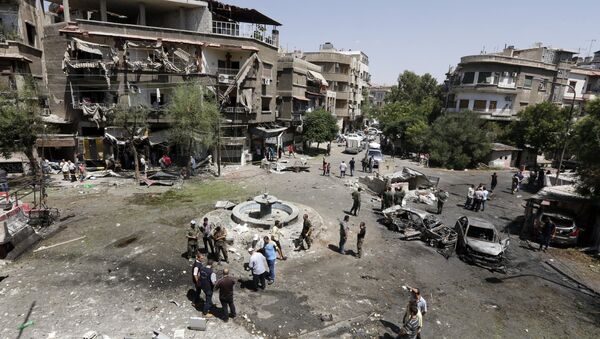 © AP Photo / LOUAI BESHARA
Subscribe
International
India
Africa
Syria’s Tomorrow opposition movement acted as a mediator in the negotiations on establishment of a de-escalation zone in the northern part of the Syrian Homs province, the movement said in a statement obtained by Sputnik Thursday.

CAIRO (Sputnik) – Earlier in the day, Russian Defense Ministry spokesman Maj. Gen. Igor Konashenkov said the representatives of the Russian Defense Ministry and moderate Syrian opposition reached an agreement during their meeting in Cairo on July 31 on the third de-escalation zone in Syria, north of Homs. Konashenkov noted that Russian military police will set up two border checkpoints and three observation posts in the zone on Friday.

"Syria’s Tomorrow movement announced that it has completed mediation in the conclusion of a ceasefire agreement between moderate opposition and regime’s forces in the northern province of Homs," the statement said.

The statement added that the agreement was signed under the patronage of the Egyptian government and with the Russian Defense Ministry serving as a guarantor and called on the conflicting sides to adhere to the deal.

Russian Envoy to UN Hopes Syria’s De-Escalation Zones to Help Mitigate Conflict
"It will save lives of the Syrians and facilitate their humanitarian sufferings after the long years of siege. Any agreement on ceasefire in any Syria’s region is a step that will be followed by the others to achieve full political settlement," the statement added.

The statement also noted that the de-escalation zone includes the towns of Talbiseh, Ar Rastan and Houla as well as dozens of small settlements and added that first humanitarian convoys are expected to enter the zone on Sunday.

The Syrian civil war has been raging for six years, with government forces fighting against both Syrian opposition groups who strive to overthrow President Bashar Assad, and numerous extremist and terrorist groups such as Daesh and Jabhat Fatah al-Sham, both of which are outlawed in Russia.