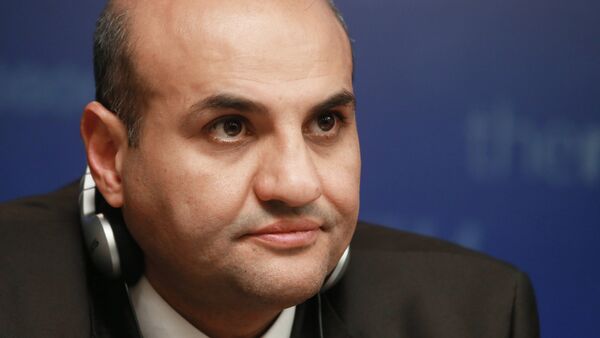 Tarek Ahmad, a member of the Syrian Social Nationalist Party (SSNP), a part of the Damascus platform of Syrian opposition, stated that because Russia is the only country with the existing means of leverage over all sides to the conflict, it can be the driving force in the reconciliation process of Syrian crisis.

Lavrov: Israeli Interests to Be Taken Into Account in Syria De-Escalation Zone
MOSCOW (Sputnik) — Tarek Ahmad, a member of the Syrian Social Nationalist Party (SSNP), a part of the Damascus platform of Syrian opposition, told Sputnik on Monday that he believed the Israeli opposition to the Russian-US deal on southern Syria ceasefire was an attempt to protect the Nusra Front terror group (outlawed in Russia) and its affiliated terrorist groups.

On Sunday, the Haaretz newspaper reported that during a press conference following his meeting with French President Emmanuel Macron in France, Israeli Prime Minister Benjamin Netanyahu voiced his opposition to the Russian-US deal on the ceasefire as the agreement secures Iran's presence in war-torn Syria.

"The Israelis are not just securing their borders in southern Syria, they are also working with Nusra and affiliated terror groups. In fact, there is a lot of evidence of their close cooperation in the Golan Heights and on the southern borders of Syria. Many of the insurgents are going to the hospitals in Israel. They oppose this agreement because they want to continue helping the terror groups as they do not want this crisis to be solved at any price," Ahmad said.

According to the Syrian politician, because Russia is the only country with the existing means of leverage over all sides to the conflict, it can be the driving force in the reconciliation process.

"Russia is the only state, which is working with all sides. Of course, Russia is an ally of the Syrian government but it also has good relations with the real opposition forces in Syria. Besides, Russia has good relation with Jordan and Israel," Ahmad stressed.

Netanyahu Opposes Russian-US Agreement on Ceasefire in South Syria
Russian Foreign Minister Sergey Lavrov on Monday reassured Israel that Russia and the United States would do everything in their power to ensure that Israel's interests were reflected when the Moscow-Washington de-escalation zone in southwestern Syria was established.

Lavrov also noted that preparatory work ahead of the July 7 agreement between Russian President Vladimir Putin and his US counterpart Donald Trump to implement a regional ceasefire had been conducted with all interested parties, including Israel.

The Israeli-Syrian relations are strained, particularly over the disputed region of Golan Heights, which has been at the center of conflict between the two Middle Eastern states since the late 1940s. Hostilities between Israel and Syria also regularly escalate as Israeli planes hit targets in Syria in response to cross-border fire incidents, while also attacking groups the former deems hostile inside the country.

The civil war in Syria between the government and various opposition and terror groups has been raging since 2011. Russia, alongside Iran and Turkey, is a guarantor of the ceasefire regime in Syria. Apart from this, in the course of the war, Moscow has been assisting Damascus both through supporting the struggle against the terrorist groups and providing humanitarian aid to the residents of the crisis-torn country.