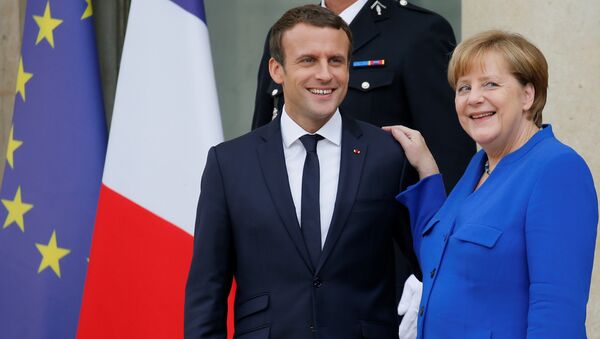 © REUTERS / Gonzalo Fuentes
Subscribe
France’s President Emanuel Macron needs in his talks with Germany to take a tough stance on the need for Berlin to end its economic dominance as the EU creditor-in-chief in order to allow for the bloc's post-crisis recovery, Sebastien Cochard, a member of French right-wing National Front (FN) party, told Sputnik on Thursday.

MOSCOW (Sputnik) — On Wednesday, the French president said in an interview with Germany's Funke Mediengruppe that Berlin benefited from the turmoil in the Eurozone and weaknesses of other members of the European Union, noting that "the countries, which have been already in debt, continue to increase it and those that were able to compete, become even more competitive."

"Macron is just stating macroeconomic evidences. The main macroeconomic unbalance which the world is currently experiencing comes from the huge and ballooning external surplus of Germany. Macron was elected pretending he will reform the Eurozone governance, which is currently non-functional. To reform eurozone governance, you need to convince Germany, which is close to impossible. Macron will most probably fail, but he needs to try and in order to try he needs to express a strong position and 'call a cat a cat,' as we say in French," Cochard said.

'Plan for Europe's Future': What Merkel and Macron Agreed Upon in Berlin
According to the FN politician, Germany’s immense trade surplus leads to major macroeconomic imbalances, which along with the insufficient convergence between the countries’ economies prior to the European Union's establishment are the main causes of the eurozone economic crisis.

In 2016, Germany recorded its annual surplus at 233 billion euros ($255 billion), which is the highest recorded figure to date, according to Germany’s statistical office.

"The German external surplus, which represents 9 percent of German GDP, is sucking out growth from the whole world economy, and eurozone members' GDP growth. In a normal situation of fluctuating exchange rate, this surplus would be compensated by the increased value of the German currency. In the context of the fixed exchange rate between the eurozone countries (sharing the same currency, the euro), this rebalancing cannot happen and German surplus always increases," Cochard explained.

However, according to the data published by the European Commission in May, the Eurozone economy shows signs of recovery from the worst point of the financial crisis six years ago and saw a steady period of growth. Despite the economy expanding by 1.7 percent in 2016, it still remains fragile due to significant political uncertainties in Europe, including Brexit. Moreover, this growth was not equally distributed across all European nations. Southern states are still facing difficulties in recovering from the damaging crisis, while France’s economic growth slowed in the first quarter of 2017 to 0.3 percent.