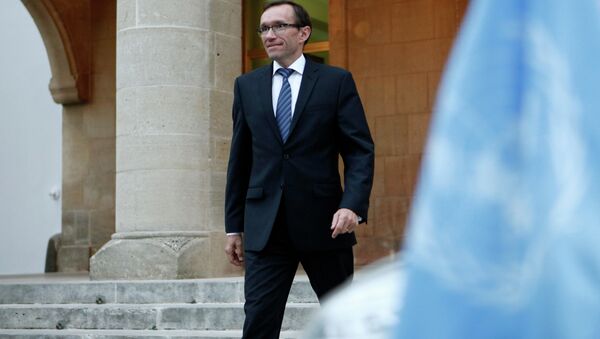 US Disappointed Cyprus Conference Ends Without Agreement - State Department
ATHENS (Sputnik) — According to the Athens News Agency-Macedonian Press Agency (ANA-MPA), Akinci announced Eide's resignation, however, it is reportedly not caused by the failure to reach an agreement at Cyprus reunification negotiations which ended in the Swiss Crans-Montana resort.

The news agency specified that the UN mediator's resignation is slated for the end of July. Eide will reportedly take part in the parliamentary elections in Norway.

Greece repeatedly accused Eide of taking pro-Turkish position in the reconciliation talks. On June 27, President of Cyprus Nicos Anastasiades rejected Eide's proposals for the recent Geneva conference on the Cyprus settlement, stressing that the document ignored many significant issues.

Cyprus has been partitioned since 1974, when Turkey occupied the island's northern part, later proclaiming the region the Turkish Republic of Northern Cyprus (TRNC). Turkey maintains a military presence in TRNC, which is only recognized by Ankara as an independent state.