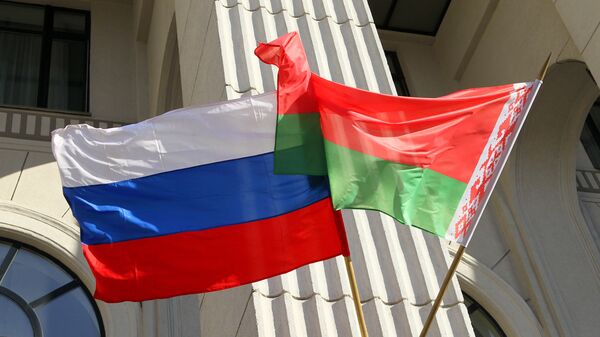 Belarusian President Alexander Lukashenko will take part on Friday in the session of the Supreme State Council of the Union State of Russia and Belarus and the forth Forum of Regions of Belarus and Russia within his working visit to Moscow.

Belarusian Ambassador to Russia Hopes for Quick Resolution of Border Issues
MOSCOW (Sputnik) – Lukashenko is also expected to hold a meeting with Russian President Vladimir Putin to discuss the most relevant issues of cooperation between the two states both in bilateral and integration formats.

Relations between Russia and Belarus involve cooperation as part of the Union State of Russia and Belarus. The two countries established diplomatic relations on June 25, 1992. On December 8, 1999, they signed a treaty establishing the union state. The treaty was preceded by the Commonwealth of Belarus and Russia established in April 1996, and the Union of Belarus and Russia in April 1997.

The legal framework of Russian-Belarusian relations includes more than 160 interstate and intergovernmental treaties and agreements. The two countries are also linked by multilateral agreements on cooperation within the framework of the Commonwealth of Independent States (CIS), the Collective Security Treaty Organization (CSTO) and the Eurasian Economic Union (EAEU).

The two countries’ leaders met 10 times in 2015 and four times in 2016. The meetings were both bilateral and multilateral on the sidelines of EAEU, CSTO, and CIS events. On April 3, Putin and Lukashenko met in St. Petersburg and focused their discussion on Belarus' debts restructure related to gas arrears.

Russian and Belarusian heads of government Dmitry Medvedev and Andrey Kobyakov maintain dialogues on a regular basis. There are ongoing active contacts between the two foreign ministries and a constant dialogue between various ministries and departments.

Russia and Belarus have common or similar positions on major international issues and closely cooperate within the United Nations and other universal and regional organizations.

Belarus ranks first in terms of Russia's trade turnover with CIS countries and fourth among all Russian trade partners. In turn, Russia is a major trade and economic partner of Belarus, with a nearly 50-percent share of the country's foreign trade turnover.

According to Russia’s Federal Customs Service, Russian-Belarusian trade amounted to $23.868 billion in 2015, including Russian exports worth $15.206 billion and imports of $8.662 billion.

Meanwhile, according to Belarusian National Statistics Committee figures, bilateral trade amounted to $27.533 billion, including Russian exports worth $17.144 billion and imports worth $10.389 billion.

In January-September 2016, Russian-Belarusian trade amounted to $16.938 billion, including Russian exports worth $10,278 billion and imports, $6.60 billion, according to the Russian Federal Customs Service.

The bulk of imports from Belarus are comprised of food products and agricultural raw materials, machinery, equipment and vehicles, chemical products, metals and metal products, textiles, garments and footwear.

There are about 1,500 joint Russian-Belarusian ventures operating in Russia and 2,700 companies with Russian capital in Belarus.

Despite various economic challenges, Russia provided considerable financial assistance to Belarus as an allied country in 2015, including two loans of $110 million and a $760 million. On March 25, 2016, the Council of the Eurasian Fund for Stabilization and Development (EFSD) decided to issue a $2-billion-loan to Belarus.

The Russia-Belarus relationship is largely boosted by actively developing cooperation on the level or their regions. Over 80 regions in Russia maintain trade and economic cooperation with Belarus. There are Belarusian trading houses and networks of Belarusian stores and dealership agencies in large Russian cities.

The Third Forum of Russian and Belarusian Regions was held in Minsk in June 2016 to further develop and strengthen regional ties.

There are rich cultural ties between Russia and Belarus, with regular cross-cultural years and festivals taking place.