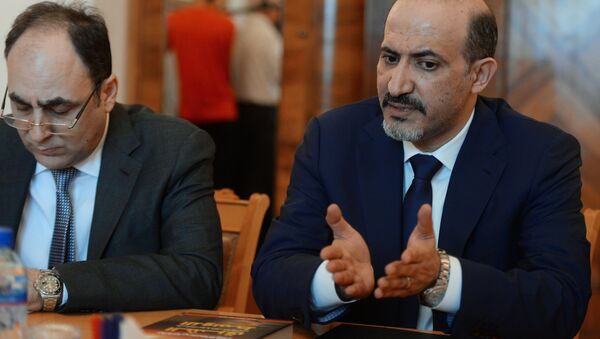 'Syria's Tomorrow' Opposition Leader Counts on Russia in Intra-Syrian Talks
MOSCOW (Sputnik) — Jarba noted that Moscow’s role in the peace process, especially in maintaining the ceasefire, was discussed at the talks.

"We discussed the agreements already made. Besides, we talked about the fight against terrorist organizations Islamic State (Daesh) and al-Qaeda [both banned in Russia], the upcoming meeting in Astana, implementation of ceasefire regime in Syria, and also ways forward for the Geneva political settlement negotiations," Jarba said, summarizing his meeting with the Russian minister.

The opposition leader added that members of his group would take part in negotiations in both Astana and Geneva.

"We will participate in both meetings. Our representatives will be part of the Cairo platform," he said.

The meeting in Moscow was held ahead of the next round of Astana talks on Syria slated for July 4-5. Meanwhile, the Geneva negotiations, held under the aegis of the United Nations, are expected to begin on July 10.

The Syria's Tomorrow group was created in Cairo in March 2016 on a platform of decentralized rule in Syria. It emerged in a new bid to unite liberal opposition forces under one umbrella organization.