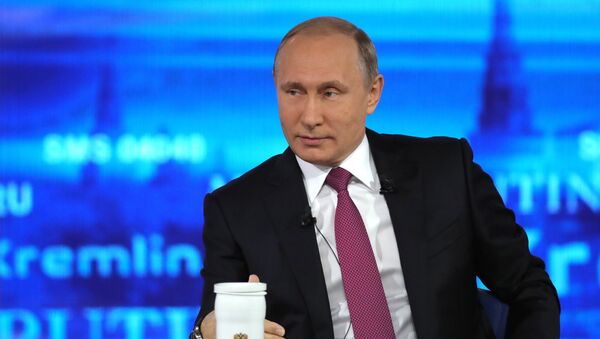 "What allows us to say that the recession in the Russian economy is over? The first and very important fact is that we had three quarters of economic growth, GDP growth. Modestly, but nevertheless, [it grows] from quarter to quarter," Putin said during his annual "Direct Line" session.

He recalled that GDP growth in the fourth quarter last year amounted to 0.3 percent year-on-year, then accelerated to 0.5 percent in the first quarter of this year before growing 1.4 percent in April compared to the same month last year.

"In general, over four months we had plus 0.7 percent," Putin added.

Putin: Recession in Russian Economy Over, 'We Move to Growth'
Russia has been hit by a downturn that began in early 2015 after falling oil prices and Western anti-Russia sanctions took bite. The country's GDP fell 3.7 percent in 2015, according to the Russian Federal Statistics Service Rosstat.