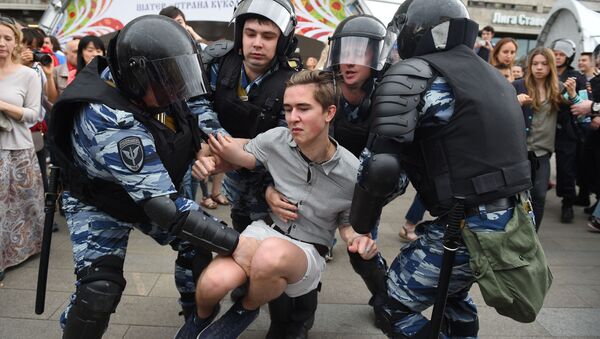 © AFP 2021 / STR
Subscribe
The Kremlin slammed the actions of provocateurs who tried to disrupt Russia Day celebrations on Monday.

MOSCOW (Sputnik) — Provocative actions during Russia Day celebrations in central Moscow posed a danger to citizens, Kremlin spokesman Dmitry Peskov said Tuesday, drawing a contrast to those rallies that have been arranged with the authorities across the country.

"Yesterday in Moscow, when tens of thousands of people celebrated the national day of our country, this group of provocateurs, namely their actions, posed a danger to the citizens," Peskov told reporters.

He clarified that "law enforcement agencies take the necessary actions in relation to such persons."

"Holding events of this kind in a coordinated regime, as prescribed by law, does not pose any danger to anyone," Peskov said.

Law enforcement officials did everything to ensure the rule of law during provocations at the unsanctioned rallies, according to Peskov.

"There were also provocative actions. In this case, law enforcement officials did everything that the law required of them to ensure this very rule of law," he said.

He contrasted the provocations in central Moscow to peaceful rallies across other Russian cities.

"Where they took place in accordance with the rules in the agreed places and at the agreed time, they were fairly organized, peaceful, without any problems," Peskov said.

Russia disagrees with the White House characterization that "peaceful protesters" gathered at the unsanctioned rallies, the Kremlin spokesman said.

"We do not agree with this formulation of the question, these are not the calls which we can heed," Peskov said a day after White House press secretary Sean Spicer said Washington "strongly condemns the detention of hundreds of peaceful protesters."

Peskov stressed that "those who held a peaceful event, peaceful in the formulation of our colleagues form the White House, they held such events across a number of Russian cities."

"Those who engaged in provocative actions in violation of the law, the authorities took actions against them also in full compliance with our legislation," he said.