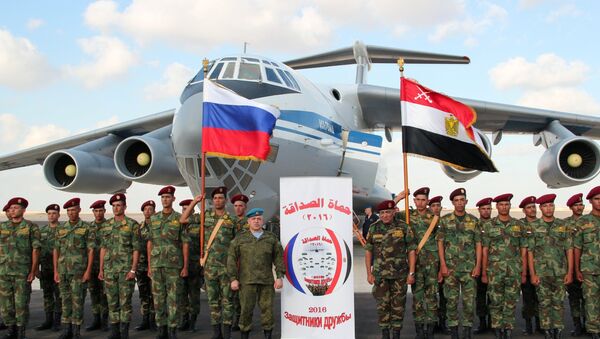 © Sputnik / Andrey Chapligin
/
Go to the photo bank
Subscribe
Egyptian Foreign Minister Sameh Shoukry said that Cairo and Moscow are closely coordinating their efforts to eliminate the sources of financing of terrorism, taking measures against terrorist sponsoring states that provide terrorists with asylum, as well as with bases for training, arming them.

Russia in Talks With Egypt on Deliveries of Copters for Mistral-Class Warships
Russian Foreign Minister Sergey Lavrov and Defense Minister Sergei Shoigu held a "2+2" format meeting with their Egyptian counterparts Sameh Shoukry and Sedki Sobhy in Cairo earlier on Monday to discuss crises in Syria, Libya, the Arab-Israeli settlement and bilateral military-technical cooperation.

"We are most closely coordinating with the Russian Federation the search for possible solutions [to combat terrorism], eliminating the sources of financing of terrorism, taking measures against terrorist sponsoring states that provide them [terrorists] with asylum, as well as with bases for training, arming them," Shoukry said.

"During the talks in this format [2 + 2], we touched upon all areas of joint cooperation. They [the talks]  indicate that in the future more common interests will be achieved," Shoukry added.

Russian Foreign Minister Sergey Lavrov said that he and Defense Minister Sergei Shoigu discussed with Egyptian counterparts on Monday practical steps to increase efforts in the fight against terrorism.

"We need to keep constant vigilance and establish the broadest international cooperation in the fight against terrorism," Lavrov said following the talks.

"This topic was one of the main on the agenda of talks between the foreign and defense ministers and especially at the meeting with Egyptian President Abdel Fattah Sisi," Lavrov said.

According to the Russian foreign minister, "we are united in the need to increase the efforts of the world community in the fight against terrorism,  and we examined in detail all the steps that are being taken now [in that area]."