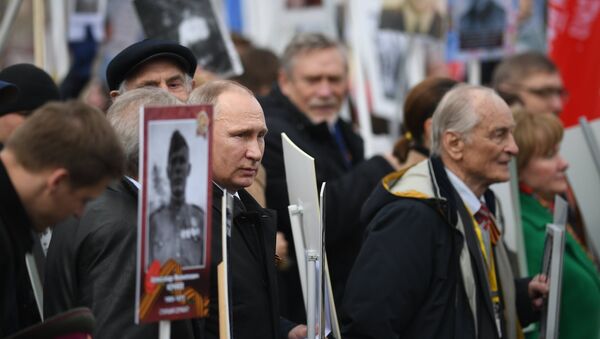 © Sputnik / Vladimir Astapkovich
/
Go to the mediabank
Subscribe
International
India
Africa
The "Immortal Regiment" commemorative march is a popular enough event that does not require extra organizational efforts on the part of authorities, Kremlin spokesman Dmitry Peskov said Wednesday commenting on claims that schoolchildren were forced to participate in Tuesday's march.

Russia
'Immortal Regiment' March in Moscow During Victory Day Celebrations (VIDEO)
MOSCOW (Sputnik) — According to the Russian Interior Ministry, more than 850,000 people joined the commemorative march in Moscow on Tuesday, which has become an absolute record for the event.

The "Immortal Regiment" is a patriotic initiative that commemorates World War II soldiers in the form of marches held across Russia and other countries. Within the framework of the movement, people march with images of their ancestors, who had participated in the Second World War. The event took place for the first time in 2012 in the Russian city of Tomsk and has since spread to other cities and countries across the world.