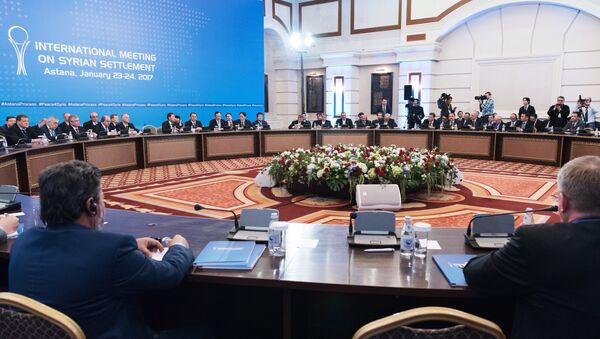 ASTANA (Sputnik) — On May 3-4, the Kazakh capital is hosting the fourth round of the Astana talks on Syria. The previous three rounds took place in January, February and March. Russia is represented by Lavrentiev, Director of Middle East and North Africa Department in the Foreign Ministry Sergei Vershinin and Gen. Stanislav Gadzhimagomedov. Earlier in the day, a source said the Syrian delegation suspended its participation in the talks after demanding guarantor countries to put an end to airstrikes in Syria.

"Syrian armed opposition has indeed arrived to the conference room, but soon received some news coming from Al Jazeera alleging that Russian jets carried out missile strikes against moderate opposition near Hama and Daraa. It later turned out that this was not true, according to our information… It appears we are again seeing that the opposition does not want to take on certain commitments in Astana and is thus trying to use any pretext to either undermine or forestall their participation," Lavrentiev said during a briefing.

"The Turkish side thinks that armed Syrian opposition should take part in the talks. If it thinks that there are some problems, these should be resolved. So we hope that common sense will prevail and [Mohamed] Alloush, who heads the delegation, and other senior delegation figures will take part in talks tomorrow. They have not left the country, they are inside the hotel at the moment," Lavrentiev said.

"Unfortunately, one and a half years on, moderate opposition has not been separated from al-Nusra Front (also known as Jabhat Fatah al Sham, outlawed in Russia)… We decided to go down the route of creating zones where terrorist groups will be engaged by moderate opposition with support from the guarantor states," he said.

"Russia is making a significant effort in settling the Syrian conflict and is developing various plans to strengthen the ceasefire and making it more effective. In order to improve these efforts, Russia has proposed to create so-called de-escalation zones in Syria. We think that this may help in moving ahead with separating moderate opposition and terrorist groups, mainly Daesh [IS, outlawed in Russia] and al-Nusra Front, and help with significantly reducing confrontations between Syrian armed opposition and government forces," Lavrentyev explained.

000000
Popular comments
Perhaps a BOYCOTT on the DOLLAR? No more dollar transactions worldwide. I mean this PUTRID'S In Washington need to PAY. Of course is the people that will pay as everywhere else. BUT then U.S HEGEMONY MUST end, because is EVIL. Washington DARE add sanctions until a transition in Damascus happens. OIL is Russian so they added sanctions. Time Russia learn to just PULL from U.S. Venezuela is threatened with sanction over any constitutional changes, meaning that U.S is DE FACTO the sponsor of Venezuela's opposition. And been killing civilians to fuel a VIOLENT COUP. Perhaps Russia should be more hectic in solving world issues. U.S is the worst THREAT to world peace. With E.U U.K .. And NATO and members.
cast235
3 May 2017, 23:21 GMT1
000000
Newsfeed
0
New firstOld first
loader
LIVE
Заголовок открываемого материала
Access to the chat has been blocked for violating the rules . You will be able to participate again through:∞. If you do not agree with the blocking, please use the feedback form
The discussion is closed. You can participate in the discussion within 24 hours after the publication of the article.
To participate in the discussion
log in or register
loader
Chats
Заголовок открываемого материала
Worldwide
InternationalEnglishEnglishMundoEspañolSpanish
Europe
DeutschlandDeutschGermanFranceFrançaisFrenchΕλλάδαΕλληνικάGreekItaliaItalianoItalianČeská republikaČeštinaCzechPolskaPolskiPolishСрбиjаСрпскиSerbianLatvijaLatviešuLatvianLietuvaLietuviųLithuanianMoldovaMoldoveneascăMoldavianБеларусьБеларускiBelarusian
Transcaucasia
ԱրմենիաՀայերենArmenianАҧсныАҧсышәалаAbkhazХуссар ИрыстонИронауОssetianსაქართველოქართულიGeorgianAzərbaycanАzərbaycancaAzerbaijani
Middle East
Sputnik عربيArabicArabicTürkiyeTürkçeTurkishSputnik ایرانPersianPersianSputnik افغانستانDariDari
Central Asia
ҚазақстанҚазақ тіліKazakhКыргызстанКыргызчаKyrgyzOʻzbekistonЎзбекчаUzbekТоҷикистонТоҷикӣTajik
East & Southeast Asia
Việt NamTiếng ViệtVietnamese日本日本語Japanese俄罗斯卫星通讯社中文（简体）Chinese (simplified)俄罗斯卫星通讯社中文（繁体）Chinese (traditional)
South America
BrasilPortuguêsPortuguese
NewsfeedBreaking
03:07 GMTAxis of Resistance Killed US, Israeli Commanders in Revenge for Soleimani's Assassination - Report
02:56 GMTPolitical Capital & GOP in His ’Grip’: Trump ’Wants Back’ in 2024, Journos Say
01:43 GMTIRGC Chief: Iran No Longer Sees US as Threat - Report
01:18 GMTChinese Covid Vaccines Reach 100 Nations, But WHO Warns Africa Still Short 470 Million Shots in 2021
01:04 GMTAwkward Moment as White House Staff Cuts Off Biden-Johnson Meeting in Mid-Sentence
00:20 GMTVideo: Military Jet Intercepts Small Aircraft Over NYC in the Middle of UN General Assembly
00:19 GMTPark Ranger ‘Implored’ Gabby Petito to Distance Herself From Toxic Relationship With Brian Laundrie
YesterdayVideos: 6.0 Earthquake Strikes Southeastern Australia
YesterdayPro-Reunification Candidate Chang Ya-chung Edges Ahead as Chairman Election in Taiwan’s KMT Nears
YesterdayTexas Governor Vows to Prevent Del Rio Migrant Surge Disaster From Being Replicated
YesterdayUber’s Business Model Faces Threat After Legal Setback Across Europe
YesterdayUS Lawsuit Challenges Alliance of 2 Airlines for Stifling Competition
YesterdayTaliban Say No Al-Qaeda Members Present in Afghanistan
YesterdayJoe Biden Faces Backlash Over Inept UN Speech
YesterdayUS Democrats Strike Down $1Bln in Israel Defense Aid to Keep US Govt Running, Reports Say
YesterdayPope Jokes ‘Some People Wanted Him Dead’ While He Was Undergoing Surgery, Reports Say
YesterdayNo American Dream for Haitians
YesterdayBoris Johnson Contradicts Joe Biden With Claim of Intelligence That Taliban Could Take Kabul
YesterdayPelosi Accuses GOP of ‘Trying to Force First-Ever US Default’ by Opposing Limit Suspension Bill
YesterdayFamily Lawyer Confirms Human Remains Found in Wyoming Belong to Gabby Petito