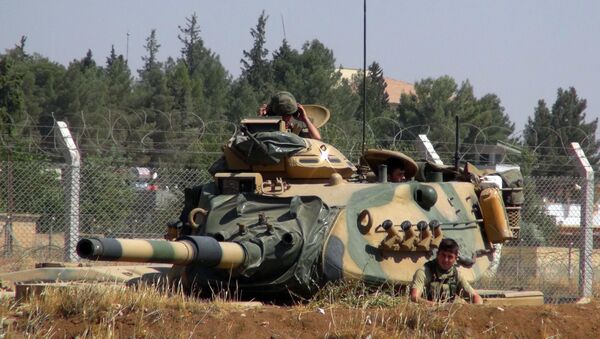 © AP Photo
Subscribe
Russian President Vladimir Putin and his Turkish counterpart Recep Tayyip Erdogan are scheduled to meet on May 3 in Sochi, with the visit coming at a time when Ankara-led forces have been increasingly active in northern Syria.

Russian, Syrian Officials Discuss Foreign Attacks Against Mideast Country
The six-year-long conflict in Syria has always been a major point of contention for Moscow and Ankara since they rarely see eye to eye on what should be done to bring lasting peace to the war-torn Arab country.

In an interview with Sputnik Turkey, Yasin Aktay, deputy chairman of the ruling Justice and Development Party, said that Russia and Turkey should not suspend bilateral dialogue to avoid major negative implications.

"In any case, diplomatic channels between our nations must remain open. We must preserve and foster cooperation and opportunities to discuss all the important issues, even the most critical and sensitive ones. These considerations helped us to restore bilateral relations following a major crisis. Clearly, close dialogue between two major nations is a key factor when it comes to ensuring security and stability of the Middle East," he said.

The high-ranking Turkish official was referring to the November 2015 incident which saw the Turkish Air Force shoot down a Russian bomber in Latakia, citing airspace violations. Moscow has denied these claims, saying that the plane remained in Syrian skies during its anti-Daesh mission. The incident sent the relationship into a deep freeze for more than six months.

Kurds Concerned Turkey Could Get 'Green Light' From NATO to Attack Them
Unsurprisingly, Syria is expected to be the main topic on the agenda of the upcoming meeting between Putin and Erdogan. Both Russia and Turkey are actively engaged in the conflict, with Moscow providing counterterrorism assistance to President Bashar al-Assad and Ankara backing rebel forces in border regions.

Most recently, the Turkish military was engaged in heavy clashes with Kurdish forces in northern Syria.

Kirill Semyonov, who heads the Center for Islamic Studies at the Institute of Innovative Development, told Svobodnaya Pressa that the latest border incident is part of Erdogan's long-term strategy toward the Syrian Kurds.

"Apparently, Ankara remains unsure what moves should be made to resolve 'Kurdish terrorism.' This is why the Turkish president is acting as always – he is improvising. At the same time he has room for maneuver since he could launch a similar operation in Iraq. In other words, he would be able to act against the Kurdistan Workers' Party (PKK) on a territory stretching from [the Iraqi town of] Sinjar to Afrin, a city in northern Syria," he explained.

Ankara has maintained that Syrian Kurds, particularly the Democratic Union Party (PYD) and its armed wing, known as the People's Protection Units (YPG), are affiliated with the PKK, a militant group fighting for greater Kurdish autonomy in Turkey. Erdogan and his supporters view all groups linked to or suspected of ties with the PKK to be terrorist organizations which should be eliminated. This was one of the reasons behind Turkey's decision to launch a large-scale military campaign in northern Syria, dubbed Operation Euphrates Shield.

Kurdish PYD Armed Wing Kills 17 Turkish Soldiers in North Syria
Although Operation Euphrates Shield was wrapped up last month, Turkish authorities have repeatedly indicated that they could launch a similar offensive in the future. For instance, Ankara is rumored to be ready to carry out a military operation in Tell Abyad, a town administered by the YPG since June 2015.

The offensive, if launched, will likely spark Washington's discontent since the Pentagon has relied on the Kurds in its anti-Daesh operations in the Middle East.

"Washington's stance is a problem for Turkey. It cannot be ruled out that Americans will try to prevent the Turkish leadership from making rash decisions since they could affect the US-led counterterrorism activities. This is what could be behind reports of US troops and planes patrolling the border region," he said.

Earlier this week, photos and video footage emerged showing US service personnel deployed to Turkey's border. Many have suggested that US troops are meant to serve as a buffer between Ankara-led forces and Kurdish fighters, with an anonymous source with the (YPG) confirming this information in an interview with Sputnik Turkey.

000000
Popular comments
More Sputnik Turk-promoting articles. These medieval uncivilized Orc's, the sick man of Europe, has to be kept on a very short leash, as Russia are doing now in northern Syria and to some extent even the US, or they will simply do what they always does which is killing, maiming and butchering in the name of their "God" and occupy other peoples lands with their filth. Best would be to send all of them back to Mongolia or simply block them right were they are now until they start finish each other off. These are not people they are hordes of filth.

Mikhas
30 April 2017, 18:17 GMT
000000
Syria has been sold out by all players and the Kurds will be the excuse and target with the US as usual being the first to stab theim in the back followed shortly by Russia who will do little or nothing to stop Turkey's aggression against the Kurds.