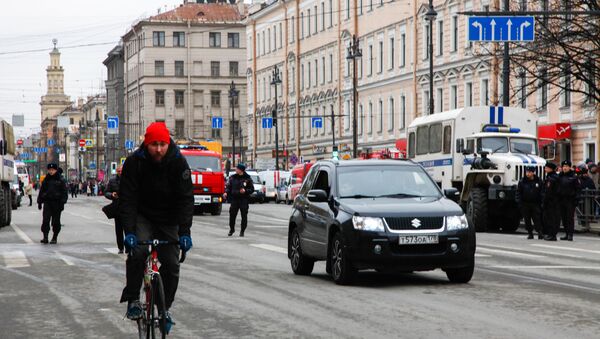 © Sputnik / Anna Volkova
/
Go to the photo bank
Subscribe
A St. Petersburg metro station has been reopened an hour after its closing, the metro service said Thursday.

Pionerskaya Metro Station in St. Petersburg Closed Due to Anonymous Report
MOSCOW (Sputnik) — A St. Petersburg metro station has been reopened and a suspicious object seized from a passenger an hour after its closing, the metro service said Thursday.

"At 11:29 a.m. [08:29 GMT], Primorskaya is opened. OMON [special police force] have confiscated a suspicious object from the passenger," the metro service said in an alert.

Earlier, it was reported that several arrests have been made after a bomb had been discovered and defused at a residential building in southeastern St. Petersburg, Russian authorities told Sputnik on Thursday.

"At the moment, the explosive device located in an apartment was rendered harmless. Several suspects were detained, they did not resist," Konstantin Serov, head of the Nevsky District administration, said.

On Monday, an explosion occurred in St. Petersburg in a subway train car on the stretch between the Sennaya Ploshchad and Tekhnologichesky Institut metro stations. Another blast that was supposed to take place on the Ploshchad Vosstaniya station was prevented by bomb technicians.

The explosion claimed the lives of at least 14 people, 55 others remain in hospitals, some are in critical condition.

The Russian Investigative Committee has opened a criminal investigation into the suspected terrorist attack in the St. Petersburg metro but it is also following other leads.