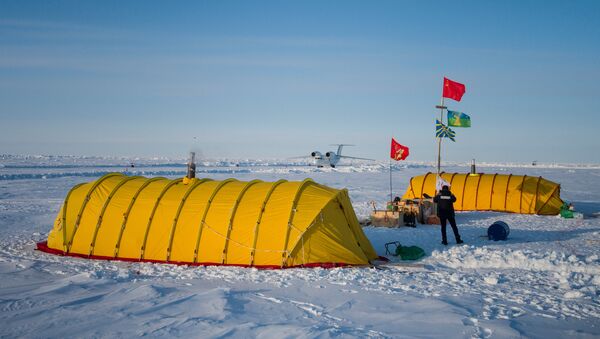 © Sputnik / Valeriy Melnikov
/
Go to the photo bank
Subscribe
Russia will open the Barneo camp near the North Pole in April, Russia's special presidential representative for international cooperation in the Arctic and Antarctic regions told Sputnik in an interview.

Russia’s Northern Fleet Troops Work Out New 2016 Arctic Winter Tasks
MOSCOW (Sputnik) — Russia will open the Barneo camp on an ice floe near the North Pole in April that would allow scientists from different countries to work there, Russia's special presidential representative for international cooperation in the Arctic and Antarctic regions told Sputnik in an interview.

"Russia's Barneo ice base, organized by the Russian Geographical Society [RGO] and the Association of Polar Explorers, would work in April. As soon as we find an ice floe and prepare a runway… equipment would be sent there and an ice camp would be set," Artur Chilingarov said ahead of the "Arctic: Territory of Dialogue" International Arctic Forum.

The presidential envoy added that within a month scientists from different countries would be able to explore ice, sea and weather in the region to monitor climate changes near the North Pole and make research on other Arctic-related sciences.

Russia's northern city of Arkhangelsk is expected to host a two-day international forum focused on the Arctic and cooperation in the polar region that would open later on Wednesday. A number of world leaders, including Russian President Vladimir Putin and his counterpart from Iceland Gudni Johannesson, will participate in the forum's events.